Songs of Eretz Poetry Review is pleased to present "Driving West," a previously unpublished poem by DeVan Burton.  Mr. Burton holds a degree from East Tennessee State University and is currently a graduate student there.  Prior to attending East Tennessee State, Mr. Burton was the editor of and a contributor to The Caney Creek Review,  Roane State Community College's literary journal.  His recent work has been published in The Southern Poetry Anthology.  Mr. Burton hails from Knoxville, Tennessee. 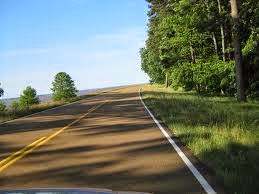 My girlfriend kissed my car’s windshield and told
me to hurry back for lemon pie, coffee, and her.
In nine hundred and fifty-five miles I will see my mother again.
She will be cold. Quiet. Statue still.
Between Crossville, Nashville, and Jackson
my car leaked oil. Leaving the east, on purpose,
felt rebellious. Mother made the same trip too.
Trails of shattered glass followed her.
So did the bad names and poor choices.
Every Saturday night she raced out of my grandmother’s
home like a teenager while I read myself to sleep.
After Memphis, the traces of red lips had vanished.
I watched the hours of asphalt travel beneath my car,
behind damp, dark lenses.

Poet's Notes:  The 20th century British poet Philip Larkin once said, "The poet should touch our hearts by showing his own.''  For me, that means a poet should strive to produce work that is honest and pure and that connects with the reader.

Editor's Note:  The opening two lines are riveting--what an image!  I found myself further drawn in by the sudden change in mood of the third line.  The story of the speaker's mother is unexpected, interesting, and, while parallel, offers a nice contrast to the speaker's story.  The ending completes the transition from the warmth and happiness of the east to the cold and sadness of the west.  I definite felt a "connection" with Mr. Burton as I read his moving poem.
Posted by Steven Wittenberg Gordon, MD at 2:52 PM