Poem of the Day: "One Home" by William E. Stafford, Poet of the Month 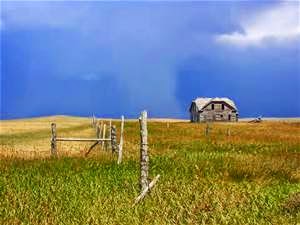 The Songs of Eretz Poem of the Day for July 27, 2014 is "One Home" by William E. Stafford, Poet of the Month.  In addition to the reviews this month, Mr. Stafford's work has been examined previously here:  http://eretzsongs.blogspot.com/2014/04/poem-of-day-once-in-40s-by-william.html, where a brief biography and references may be found.  The text of "One Home," along with an audio recording of it by the poet, may be found here:  http://www.poetryfoundation.org/poem/171502.

"One Home" is presented in five tercets; the odd lines of the second and third end with rhymes; every line of the first tercet ends in consonance; the fourth tercet contains a refrain, with the odd lines ending in consonance; and the final tercet uses neither end rhyme nor end consonance.

The final stanza is the most interesting as it is the least straightforward.  In the first line, the sun is compared to a blade.  A blade can be seen as a tool or a weapon.  So, the simile may mean that the right amount of sun is helpful, but too much or not enough causes harm.  "Blade" also evokes an image of grass and may reference the "buffalo grass" of the second stanza.  The second line evokes a sense of freedom, excitement, and danger--all cliché characteristics of the Midwest.  The final line of the poem evokes a sense of the land's reliability and support--a sense of "one home."
Posted by Steven Wittenberg Gordon, MD at 2:29 PM