Songs of Eretz Poetry Review is pleased to present "Tracks" by Nels Hanson.  Mr. Hanson, who grew up on a small family farm in the San Joaquin Valley of California, received degrees from the University of California, Santa Cruz, and the University of Montana.  He has worked as a farmer, teacher, and contract writer/editor.  His fiction received the San Francisco Foundation’s James D. Phelan Award, Pushcart Prize nominations in 2010, 2012, and 2014, and has appeared in Antioch Review, Black Warrior Review, Southeast Review, and other prestigious journals.  His poems have appeared in Word Riot, Oklahoma Review, Pacific Review, and other magazines, and are in press at:  Sharkpack Review Annual, The Straddler, Revolver, Four Chambers Press, Squalorly, Meat for Tea, Stoneboat, Insert Mag Lit Here, and The Mad Hatter's Review.  His poems published in Outside In Literary & Travel Magazine, and Citron Review have been nominated for 2014 Pushcart Prizes.

I studied the rows of Thompson Seedless
those aisles between the vines, that fine blonde
dirt my husband’s blade would angle to a pitch,
blue terracer tomorrow, before the pickers

with my daughter’s dress they’d torn
from the line, Mrs. Watkins’ two Chocolate
Dobermans—now coyotes had it in the blue
gum grove—every so often the delicate 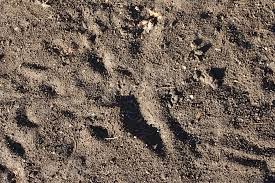 necklace trail of a snake. A thousand
animals crisscrossed, circled, swinging back,
went due west with crescent moon as you
slept, tried not to dream. Here a cottontail

changed rows, a weasel hesitated, sat
up and listened to the hush of big wings
as great-horned owl swooped and ended
the small-footed journey of a mouse.

eager, ready to spring. God’s newspaper,
the dirt kept record of all departures, secret
meetings in the dark. One morning soon
I’d lay aside the Fresno Bee and rise

from kitchen chair and into the cool
vineyard walk a long row at the edge
of the formed, powdered dust. Beyond
the claws’ impression and the tail’s

unbroken line where tired opossum walked
home near dawn, stopped, turned a slow
circle to look backward at some noise,
then fell, played dead like my lost father,

surely I’d find Kate’s footprints, fresh, beside
her lover’s in the dew, like Eve’s and Adam’s,
on land where Wednesday the yellow grapes
would turn for miles to raisins in the sun.

Poet's Notes:  In the last few years, I’ve begun to turn from fiction writing to poetry, which I have read with fairly close attention most of my life.  I was struck by an observation made by Ezra Pound, that the right symbol was always the most specific rendering of an observed or imagined image, and that an image’s potential to become poetic depended on the degree to which it could be presented in vivid detail.  A picture concisely presented in language is worth a thousand words.  The clearest picture is both here and elsewhere, now and always.

Editor's Note:  As I read, I felt like I was there alongside the speaker reading "God's newspaper"--a beautiful metaphor.  The penultimate stanza--with the introduction of the speaker's dead or missing father--and the final stanza--with the introduction of the mysterious "Kate" and the possibility of finding evidence of a clandestine human coupling in the dirt--came as wonderful surprises.  The final simile added a biblical, mythological element that took my breath away.
Posted by Steven Wittenberg Gordon, MD at 1:21 PM