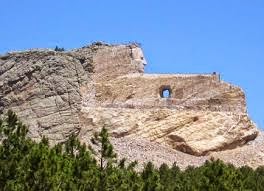 The Songs of Eretz Poem of the Day for July 22, 2014 is "Report to Crazy Horse" by William E. Stafford, Poet of the Month.  In addition to the reviews this month, Mr. Stafford's work has been reviewed previously here:  http://eretzsongs.blogspot.com/2014/04/poem-of-day-once-in-40s-by-william.html, where a brief biography and references may be found.  The text of "Report to Crazy Horse" as well as an audio recording of it by the poet may be found here:  http://www.poetryfoundation.org/poem/171506.

"Report to Crazy Horse" is a free verse poem arranged in seven stanzas of unequal length.  It reads as a report rather than a story, as the title implies.  The speaker is presumably the poet, as evidenced by the remark in the first stanza that the speaker did not fight in two wars, and by the remarks in the fifth stanza about saluting the American flag--William Stafford was a conscientious objector.  The second stanza is perhaps the most interesting and instructive.  Its lesson about how enemies are made of people who are scorned is as important now as ever.
Posted by Steven Wittenberg Gordon, MD at 6:21 PM