Poem of the Day: "Peace Walk" by William E. Stafford, Poet of the Month 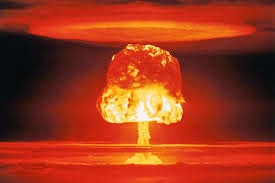 The Songs of Eretz Poem of the Day for July 16, 2014 is "Peace Walk" by William E. Stafford, Poet of the Month.  In addition to the reviews this month, Mr. Stafford's work has been reviewed previously here:  http://eretzsongs.blogspot.com/2014/04/poem-of-day-once-in-40s-by-william.html, where a brief biography and references may be found.  The text of "Peace Walk" may be found here:  http://www.poetryfoundation.org/poem/240098.

Mr. Stafford was a pacifist and conscientious objector, before it was fashionable, who refused to serve in the military during World War II.  "Peace Walk" expresses his stance against nuclear weapons while demonstrating (pun intended) the futility of making a stand for disarmament.  In the end, the greatest nuclear power--the sun--makes it clear that the signs used in the protest are useful only for field expedient shade and not much else.
Posted by Steven Wittenberg Gordon, MD at 9:43 PM