Songs of Eretz Poetry Review is pleased to present "The President of Timber Creek" by Stephen S. Power.  A Pushcart-nominated poet, Mr. Power's work has appeared most recently in:  Clarion, Innisfree Poetry Journal, The MacGuffin, and Prime Number.  His first novel, The Dragon Round, will be published by Simon451 in 2015.  Some of his stories are forthcoming in Daily Science Fiction; others have been published by 365 Tomorrows.  He lives in Maplewood, New Jersey and tweets @stephenspower. 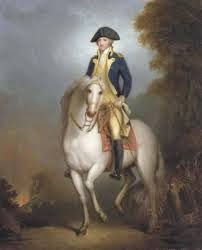 George Washington was happiest when he was with his hounds,
surrounded by a well-lined forest far from any town,
his lone responsibility to run a fox to ground.
One morning, though, near Timber Creek, one tried to bring him down.

He viewed the fox atop a hill of scrub and iron sand.
Its head held high, its body still, its ears as wide as fans,
it seemed the self-appointed guardian of all the land
from Philadelphia to Gloucester up the covert strand. 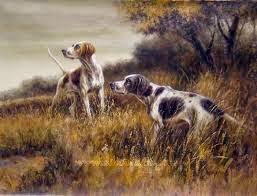 His couple—Drunkard and his favorite, Sweet Lips—both gave tongue ,
but Washington told them to sit and with his musket swung
down from his saddle. “Why,” he asked them, “will the beast not run?”
He wondered if the fox were rabid, trapped or simply young.

“I know you, sir,” the fox said, “though we’ve not been introduced,
and thought, when I first caught your scent, to have a word with you.”
The president, astonished, said, “Such form would be undue.
Indeed, the imposition’s mine. My ear is yours to use.”

He’d say the same to supplicants to put them at their ease
and found this worked on him as well when foxes made their pleas.
He gave his anxious hounds some meat, but they were not appeased.
The president ignored their whimpers. Nodding, he said, “Please.” 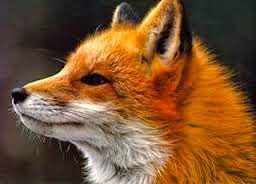 The fox said, “You’re a great man, sir, as history will show.
So many things: cities, a state, colleges, ports and roads,
will bear your name your sons might think the country all their own.
Only this simple hill is what my fathers could call home.

Yet through them I saw how this river got an older name,
Tetamekanchz, after a chief like you who fought to claim
the towns along its banks.  His life was briefer than his fame,
which lasted till the white men came with rulers, staves and chains.

So as you bring your musket up, as you strip off my skin,
as you put on what’s made from it to show off at the inn,
consider this: your name won’t last as long as I have been
watching this river drain away like men, their names, their kin.

What names it will have, will be lost as well, but I’ll still be.”
The fox stared at the president. The hounds tried not speak.
Washington said, “Your insult’s crude, if offered gracefully.
I’d add that once there was a place where we lived equally.

Sadly, it is no more.” He raised his musket, aimed and fired.
The sand exploded near the fox, exactly where desired.
“Honor is satisfied,” he said. “Permit me to retire.”
He mounted, clicked and left, his couple following like squires.

The fox dug out the ball and, laughing, kicked it in the creek.
All day, though, it was nagged by Washington’s civility
until that night while pondering which chicken it would eat
it realized why. The fox felt for the first time like a thief.

Poet's Notes:  My poems are often quickened when two disparate things somehow adhere in my mind, in this case my desire to write a coyote/trickster story and my discovery that Washington was an avid fox hunter.  The inn the fox mentions is the Death of the Fox Inn, where members of the Gloucester Fox Hunting Club, supposedly the first such club in the New World, gathered after hunts.

Editor's Note:  I can't remember the last time I read a poem with this structure that was executed so flawlessly.  I can only imagine how wonderful it would be to set this poem to music.
Posted by Steven Wittenberg Gordon, MD at 8:31 PM