Songs of Eretz Poetry Review is pleased to present "Early Thaw," a previously unpublished poem by Kristine Chalifoux, the Chairperson of the English Department at Raleigh Charter High School.  Ms. Chalifoux received her MFA from Columbia University.  In her professional life, she has been the Assistant Director of the Poetry Society of America, and the Associate Director of DePaul University’s Honors Program.  Her chapbook, In This Light, won the 1999 West Town Press prize.  Her poems have appeared in a number of literary magazines, including The Brooklyn Review, The Antioch Review, and Janus Head.  She resides in North Carolina with her magical daughter, Ktimene. 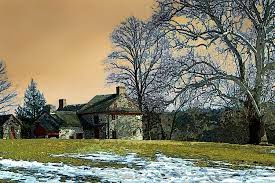 It snowed in the early morning
hours, long before light,
leaving a dusting on grass
& woodland leaves. The first snow

of winter & also the last.
The provocative late morning
sun teases temperatures closer to
forty, & the snow retreats like a dream

that fades on waking.
It’s the only snow of the season.
I want it to last. A melancholy
ache as palpable as the talcy granules of snow

dusting grass blades & leaves in the yard
rises in me & wants to find utterance --
a keening as old as the world.
How odd then, this silent snow, as soft

as old skin, creeping noiselessly away into
patches of shade beneath the yard’s loblollies?
Why is it we can find it in our hearts
to cherish the things of this world

only the moment before they vanish?

Poet's Notes:  There's something about the seasonal changes in North Carolina--each day seems to bring something new, or put to bed something old--for example, in spring, camellias precede forsythia which give way to wisteria which bow out to
crape myrtle….  Winter is brief, and its brevity also calls one to attention.  "Early Thaw" is a reflection on these changes and how we often only begin to pay attention at the ends of things.

Editor's Note:  The first/last snow conceit makes a perfect metaphor for our too late appreciation of the beautiful things in life.  I love the way Ms. Chalifoux folds susurrations into the lines--so reminiscent of snow.  The mood she creates--full of melancholy, yearning, and a sense of loss--filled me as I read.
Posted by Steven Wittenberg Gordon, MD at 8:36 PM