Poem of the Day: "At the Un-National Monument along the Canadian Border" by William E. Stafford, Poet of the Month 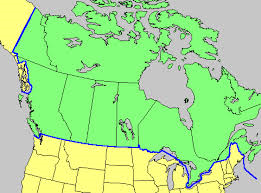 The two rhyming cinquains of "At the Un-National Monument along the Canadian Border" pay tribute to the longest practically unguarded border between two countries in the entire world--that between the United States and Canada.  The grass crosses it seamlessly, as does the sky overhead.  The lasting peace between the two countries is remarkable, and would have been an important example of how the world ideally could be in the mind of the pacifist poet William Stafford.  Granted, in the aftermath of September 11, 2001, there have been changes to the ease with which the border may be crossed, but the peaceful relations endure to this day.
Posted by Steven Wittenberg Gordon, MD at 3:04 PM