Poem of the Day: "An Oregon Message" by William E. Stafford, Poet of the Month

The Songs of Eretz Poem of the Day for July 30, 2014 is "An Oregon Message" by William E. Stafford, Poet of the Month.  In addition to the reviews this month, Mr. Stafford's work has been examined previously here:  http://eretzsongs.blogspot.com/2014/04/poem-of-day-once-in-40s-by-william.html, where a brief biography and references may be found.  The text of "An Oregon Message" may be found here:  http://www.poetryfoundation.org/poem/171503. 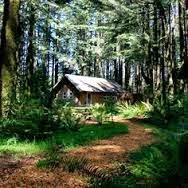 "An Oregon Message" is arranged in four stanzas of free verse; the first, of eight lines, and the second, of six, combine to form a kind of modern Italian sonnet.  There is a bit of end-line consonance but not nearly as much as is seen in one of Stafford's signature ballads.  The message of the this part of the poem, eerily relevant today, is that people who choose to live off the grid or to keep to themselves are treated with suspicion, particularly by the state.

The last two stanzas make a snarky, poetic joke--the government may have sent astronauts to the moon, but still has not discovered the citizens who value their privacy.  The two-word final stanza instructs these private citizens to burn the message--just as government spies would do.
Posted by Steven Wittenberg Gordon, MD at 5:16 PM