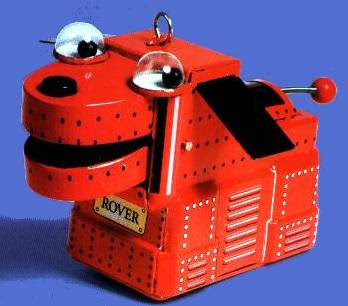 At first he would scramble madly into the red (earth?)
Happy wag, head tilt as he questioned the scents, all wrong,
He could recall pats from screwdriver-wielding hands
Rubs from warm cloth on his silky, metallic head
He wondered where they went, those meticulous, caring hands
As his limbs creaked, his brain gears sputtered – lagged –
-Kicked- -Bit- then . . . - Halted-
Rover crouched with a whimper, feeling abandoned
As all went black

Poet's Notes: This is a sad one about a robotic dog built with care to become a space rover. Though the humans' intentions weren't cruel, the dog has more of a mind, more emotions, than intended; thus, a lonely space dog shuts down all on his own. I like to think that someday he will be recovered, fixed up, and become a permanent resident of Earth after his job well done.
Posted by Steven Wittenberg Gordon, MD at 5:54 PM