"A Dig on Amalthea" by Terrie Leigh Relf

Songs of Eretz Poetry Review is pleased to present “A Dig on Amalthea” by Terrie Leigh Relf.  Relf is a lifetime member of the Science Fiction Poetry Association and an active member of Horror Writers Association.  In addition to being the contest judge and editor for Alban Lake Publishing's somewhat quarterly drabble contest, she hosts a weekly networking group for writers as well as a weekly motivational coaching call for writers. Please visit her websites: tlrelf.wordpress.com, terrieleighrelf.com, and tlrelfreikipractitioner.wordpress.com.  A previous appearance by Relf in the Review may be found here:  http://eretzsongs.blogspot.com/2015/02/poem-of-day-some-time-after-apocalypse.html. 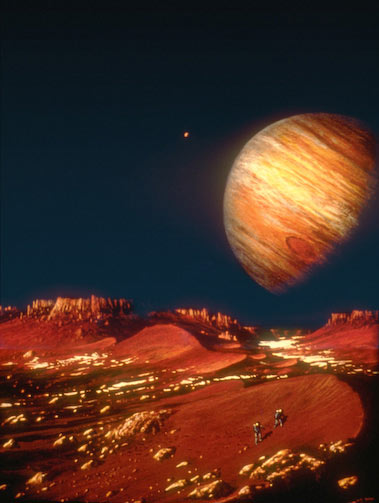 Everything so red,
like blood flowing,
frozen beneath glacial ice;
oh how it seems to rise,
swirl, when we gaze
into the distance
just so.

Red.
How everything
is so red,
like Jupiter's Eye watching;
no moon or orbit too small
beneath its unwavering gaze.

Within a field of craters, red,
like fields of Terran poppies
opening to the sun;
the away team lingers as
buried beneath an icy shell,
an unexpected entrance.

How it blazes,
this august hue,
the bright red of wine
at summer's end;
within the cavern,
mirroring horizon's curve,
they stand, monolithic
like the old stones of Earth.

Red.
All becomes red
as stones shatter
beneath heavy hammers
revealing many-limbed beings
jars clutched against their chests;
scent of cinnamon
and other spices,
oh how it clings to our breath.

Red, like a ruby within
a momento mori, red
like our breath
as we return to our vessel.
Red. All is red.

Poet's Notes:  I often work on several projects at once, and this poem was born as a result of conducting research for one of my short stories.  I kept returning to Jupiter's moons and was intrigued by Amalthea (pictured).  I kept imagining how Jupiter's eye would reflect as red on Amalthea, which became a refrain for the poem.

My short story was about a dig on an icy world; so, too, is this poem.  However, this is where the poem deviates from the story. This away team actually discovers something in one of Amalthea's craters: an entrance to a cave where the away team discovers strange multiple-armed creatures holding jars filled with spices from Earth.

I cross-pollinated from several cultures for this scene, from the mysterious standing stones to Egyptian lore to the Hindu/Buddhist Mahakalas, and of course, the creatures of Chthulhu legend.  Given that there are references to alien visitations throughout all these cultures, or that many believe that they were visited, part of this discovery in my mind was of Earth's origins.

So, what happened to the away team as they struggled to return to their ship? While I wanted there to be some mystery and was avoiding gore, there are several possible interpretations, all of which I entertained. First, that they became infected with some type of spores within the cave or spice jars; second, that the creatures were actually in stasis and the away team's entering the cave awakened them; third, that one of the away team members became infected and went mad; fourth . . . I'll stop here and allow you to imagine what happened, whether they survived, and if they brought this contagion—whatever its nature—back to Earth.

As to the poem's cadence and other aspects, I focused on creating different layers of meaning with the refrain. I also wanted to utilize different ways to describe the color red to add to the tension of the poem and to unveil its possible meanings.

Editor’s Note:  I really enjoy the way Relf incorporates poetic elements into the narrative here, particularly the use of refrain.  The transformation of the away team at the end gives me chills.
Posted by Steven Wittenberg Gordon, MD at 4:10 PM