Songs of Eretz Poetry Review is pleased to present “Comes November” by Ron Wallace, the winner of the 2017 Songs of Eretz Poetry Award Contest.  “Comes November” also made it to the contest finals but was not chosen to be part of a winning set.  Mr. Wallace’s biography may be found here:  http://eretzsongs.blogspot.com/2017/01/announcing-winner-of-2017-songs-of.html.

Outside my window, October lies
defeated, broken,
awaiting the cold.

The grey sky has buried the blue
beneath a chill rain,
and the lawn is lost in leaves, 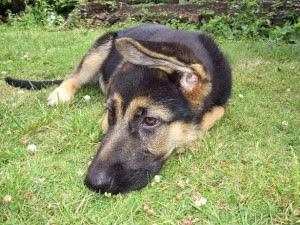 dampened by this christening of autumn.

Among hickory, blackjack oak and American elm,
I walk where leaves are falling
reluctant to surrender summer,
a futile resistance to the impending close of seasons.

I find you beneath the overhang of short roof
near our southern door
on your much-loved, worn-out blanket.
My hand falls to your head
and scratches between your standing ears
as you try to rise and meet me,
one more time.

But you cannot,
your strength is gone
so we sit,
your head, resting on my folded legs,
as I speak soft words
until you look up, right into my eyes,
offering a sad apology for a warrior’s weakness.

We have this moment,
and just before your dark eyes close a final time
with a soft exhale of October air,
I see my face, my own eyes, reflected there in yours
and I know
that a part of me will walk with you
into the coming of winter.

Twenty Octobers have faded into twenty Novembers,
into twenty winters,
and those slowly falling leaves have come again
I can feel the not too distant cold
pulsing in the ache of stiff knuckles.

Outside,
among the golden browns,  I walk
startling a handful of raucous crows
who burst and blow away.
Two grey squirrels
dart from limb to limb above my path
to this spot
where I come to find you,
a once perfect symmetry of lines,
a graceful, fluid movement of muscles and tendons
that always stood with me.
Your bones lie here,
stilled by this ever-fatal falling of leaves.
I have not forgotten you.

Beyond our western hills, I sense December’s shadow
coming to swallow shorter suns,
and my fingers recall soft fur, black on tan.
I sit back on boot heels
to brush away leaves,
covering a cinder block that marks your grave
where you keep my reflection,
in closed brown eyes.

Again I speak in soft tones,
telling you of the squirrels that you would chase,
the golden leaves you would race among,
and as always,
I sense your rising and know you have kept me
in those dark eyes
as I have kept you in mine.
And for just a brief flickering,
we will walk winter’s edge together,
before you rest and await my return again.

Poet’s Notes:  I have always thought of my animals over the years as more than pets. In my sixty plus years, I have owned many, or maybe they have owned me. I'm not sure. But either way, this poem came as a result of one particular dog, a black and tan not tan and black German Shepherd named Gandalf. My mother gave him to me right after I moved out on my own, a lost pup that wandered into her yard. I thought he was a mutt, all feet and ears, but the vet quickly identified him when I took him for his shots. We bonded quickly, became instant companions who walked together around my place or just sat with each other quietly. He was fiercely loyal and protective, shielding me with his body when others came into the yard. No one was allowed between us.

As he got old and his health began to fail, I was distraught to say the least. He was becoming less and less mobile, and I was stalling the inevitable. I couldn't bear the idea of putting him down. I would sit on the deck with him and we often looked directly into each other’s eyes. I sensed he knew the end was near and to this day I believe he knew I could not end his life myself nor bear the idea of having a stranger do it.  I had finally made up my mind that I would be his redeemer, that no one else had the right to, as I sat with him in a favored place of his; he looked up from where his head had been resting on my lap with the saddest eyes I'd ever seen before he exhaled deeply, lay his head back down, and passed this realm.

I will never cease to believe he knew and understood and simply died to spare me the act I was dreading so badly. I buried him in that spot he loved and covered the ground with cinder blocks to form a tomb. I still go there often and speak with him. He was my friend, and this poem was originally meant for the two of us. I didn't want it being seen as just another "dead-dog" poem, but my wife and a couple of other poets have convinced me it has merits as a tribute to a beautiful creature.  I hope they are right; I am likely too close to judge it.

Editor’s Note:  What a powerful elegy!  My eyes blurred with tears as I read this beautiful tribute to a faithful friend.  I was reminded of the last days I spent with my first dog, Shannah, dead now these thirty years.  The conceit of the passage of seasons is an old one but a good one, and I enjoy the way Wallace employs it here.

Comments from Contest Judge Caryn Merriam-Goldberg, PhD:  This is a lovely tribute to a beloved dog, and the poet does a great job in conveying seasonal tilts and changes. I particularly liked the ending line, emphasizing what's around the bend that's mysterious and promising. “Beneath the overhang of short roof....” paints a very clear scene along with the last trees to surrender their leaves. I also like way the poem works with twenty Octobers, Novembers and winters and “a once perfect symmetry of lines” as well as the edges the poet plays with between this life and what's beyond.
Posted by Steven Wittenberg Gordon, MD at 5:06 PM