The Songs of Eretz Poet of the Month for August 2014: William Carlos Williams 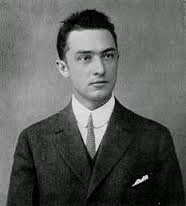 William Carlos Williams (1883 - 1963) was an American poet, novelist, essayist, and medical doctor.  From about 1910 until his retirement due to ill health about forty years later, he was a physician in private practice in Rutherford, New Jersey.  However, while the practice of medicine was his vocation, writing, particularly poetry, was his avocation, and he was determined to have full careers in medicine and literature.

Upon completion of his medical studies, Williams became a relatively unknown minion of Ezra Pound and early participant in the Imagist Movement.  Unfortunately, his potential rise in the world of poetry was eclipsed by the overwhelming success of his contemporary, T. S. Eliot, until the Beats of the 1950's adopted Williams as their inspiration and guru.  The Beats considered his epic magnum opus, Paterson, in which Williams showcased the creativity and flexibility of his signature "variable foot," to be their equivalent of Leaves of Grass.  Critics considered Paterson to be an Ars Poetica for the America of his day.  An on-going project, Paterson was published in five volumes, and a sixth was in the works at the time of his death.

Williams was offered the post of Consultant to the Library of Congress (the equivalent of the office of the modern United States Poet Laureate) in 1949, but the offer was withdrawn after false accusations of being a Communist sympathizer were raised.   Williams' last book, Pictures from Brueghel, was awarded a Pulitzer Prize in 1963, the year of his death.  Reference to these and other interesting aspects of Williams' life and career may be found here:  http://www.poetryfoundation.org/bio/william-carlos-williams.
Posted by Steven Wittenberg Gordon, MD at 9:44 PM