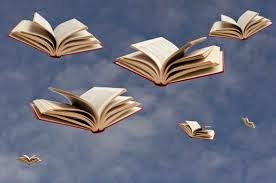 Songs of Eretz Poetry Review is pleased to present "The Story" by Anita Haas.  Mrs. Haas is a Canadian teacher and writer living in Madrid, Spain. She has published three books on film: Eugenio Martín: Un Director para todos los generos and John Phillip Law, Diabolik Angel with her husband, film historian Carlos Aguilar, and Eli Wallach: Vitalidad y Picardía on her own. She has also published articles, poems, and short stories in both English and Spanish. Most recently, her work has appeared in Literary Brushstrokes and Falling Star magazine.

I found a story. It fell right out of the sky. Whole. It looked good; a subtle beginning, a round tubby middle,
and a climactic surprise end.
So I caught it.
And I swallowed it.
And I thought, "What a great story this will be when I tell it, because it's mine now."
But it wasn't.
When I tried telling it, it fell out of me in one piece. Like a cobra's kill. No Magic.
So I swallowed it again, and perplexed, I lay down under a tree, where, like the cobra, I went to sleep.
When I woke up, I couldn't remember the story. Not a word, nor a turn of phrase.
"It has escaped." I thought, and I wandered away sadly.
A few days later, the call of a bird stirred some distant memory.
It inspired a poem.
Another day, the shape of a cloud gave birth to a song.
The bubbles in my cider completed a sketch.
A neighbour's terrible discord ended a long neglected play.
And the thread of my needlework followed an uncharted path.
Like the hen who feathers my pillow, and the horse tail stretched on my fiddle bow, so my story that
fell whole from the sky, flies off in a flock of a thousand silver fragments … forming endless beginnings,
middles and ends.

Poet’s Notes:  “The Story” is a reflection on how life affects art; how both physically and mentally we absorb things. Just as eating certain foods may result in shinier hair or stronger eyesight, our experiences affect us artistically. As a writer, I often overhear a great bit of gossip, or snatch of dialogue and think I might use it, only to realize it doesn’t fit anywhere. What intrigues me is how these nuggets work their way through the subconscious and often make their appearance where one least expects.

Editor’s Note:  I like the prose poem and fairytale feel of this poem as well as its interesting take on the creative process of writing.  “The Story” previously appeared in Quantum Leap and The Plum.
Posted by Steven Wittenberg Gordon, MD at 5:06 PM