Poem of the Day: "It Is a Living Coral" by William Carlos Williams, Poet of the Month 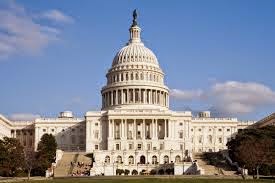 In "It Is a Living Coral," Williams showcases his signature style in using his "variable foot."  The title serves as the first line of the poem.  "Living coral" refers to the ancient origin of the white marble used in the construction of the capitol, rock formed from the exoskeletons of coral http://geology.com/rocks/limestone.shtml.  The coral "lives" again as a symbol of the American system of government.