Poem of the Day: "Queen-Anne's Lace" by William Carlos Williams, Poet of the Month 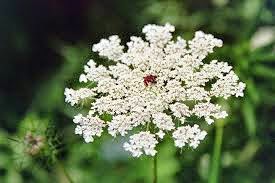 The Songs of Eretz Poem of the Day for August 5, 2014 is "Queen-Anne's Lace" by William Carlos Williams, Poet of the Month, originally published in The Collected Poems of William Carlos Williams, Volume I, 1909 - 1939, edited by Christopher MacGowan.  The text of the poem, as well as an audio recording of it by the poet, may be found here:  http://www.poetryfoundation.org/poem/175784.  A brief biography of Williams and references may be found here:  http://eretzsongs.blogspot.com/2014/08/the-songs-of-eretz-poet-of-month-for.html.

Poems about flowers are SO 18th century.  Accordingly, a contemporary poet who chooses a flower as a subject is certainly taking his chances with his readership, the only exception being using the flower as a conceit in a love poem to woo women--that still works.  There does not appear to be a conceit in "Queen-Anne's Lace;" it is simply a poem about the weed.  Perhaps the poet mocks the flower poem genre (or is just showing off) by "elevating" a weed to the level of the red, red rose.