Poem of the Day: "Flowers by the Sea" by William Carlos Williams, Poet of the Month 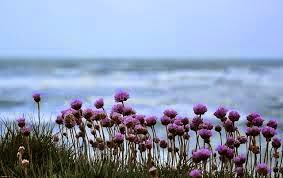 The Songs of Eretz Poem of the Day for August 11, 2014 is "Flowers by the Sea" by William Carlos Williams, Poet of the Month.  The poem was taken from The Collected Poems of William Carlos Williams, Volume 1: 1909 - 1939.  The text of the poem may be found here:  http://www.poetryfoundation.org/poem/238104.  An audio recording of the poem by the poet may be found here:  https://media.sas.upenn.edu/pennsound/authors/Williams-WC/02_Library-of-Congress_05-05-45/Williams-WC_34_Flowers-by-Sea_Library-of-Congress_05-05-45.mp3.  A brief biography of Williams and references may be found here:  http://eretzsongs.blogspot.com/2014/08/the-songs-of-eretz-poet-of-month-for.html.

While organized in four couplets, "Flowers by the Sea" has a ballad-like lilt to it, a rhythm perhaps meant to evoke ocean waves.  The poet imagines that flowers may be thought of as waving like water, and that the ocean may be thought of as a gigantic plant whose stem is the earth itself.  Note the pun "tied" (for tide) in the fourth line, which is where the grand metaphors begin.
Posted by Steven Wittenberg Gordon, MD at 9:11 PM