Poem of the Day: "To a Poor Old Woman" by William Carlos William, Poet of the Month 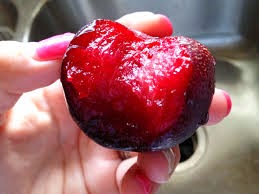 The Songs of Eretz Poem of the Day for August 13, 2014 is "To a Poor Old Woman" by William Carlos Williams, Poet of the Month.  The poem was taken from The Collected Poems of William Carlos Williams, Volume 1: 1909 - 1939.  The text of the poem as well as an audio recording of it by the poet may be found here:  http://www.poetryfoundation.org/learning/guide/236558#poem.  A brief biography of Williams and references may be found here:  http://eretzsongs.blogspot.com/2014/08/the-songs-of-eretz-poet-of-month-for.html.

Williams repeats the phrase "they taste good to her" in the manner that some poets use anaphora or refrain.  Williams uses this repetition to drive into the mind of the reader the image of someone enjoying a really tasty plum, elevating Imagist poetry beyond mere image, as taste, smell, texture, and sound, while not directly addressed, are also evoked.  For that moment, the total enjoyment of the plum becomes the center of the universe.
Posted by Steven Wittenberg Gordon, MD at 9:59 AM