Poem of the Day: "To My Wife--With a Copy of My Poems" by Oscar Wilde

"To My Wife--With a Copy of My Poems" by Oscar Wilde is the Songs of Eretz Poem of the Day for May 25, 2014.  The poem is in the public domain and therefore legally reprinted here.


To My Wife--With a Copy of My Poems
Oscar Wilde 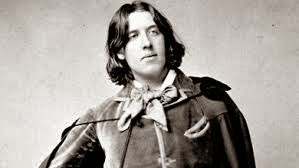 I can write no stately proem
As a prelude to my lay;
From a poet to a poem
I would dare to say.

For if of these fallen petals
One to you seem fair,
Love will waft it till it settles
On your hair.

And when wind and winter harden
All the loveless land,
It will whisper of the garden,
You will understand.

Oscar Wilde (1856 - 1900) (pictured) is best known as the author of The Picture of Dorian Gray and The Importance of Being Earnest.  Wilde's wit and witticisms made him a legend in his own time.  In the early 1890s, at the height of his fame, he was "the most sought after dinner guest in England."  Although he was married and fathered two sons, he was a notorious homosexual, and his affair with the son of a prominent aristocrat led to his imprisonment for indecency.  He died in poverty three years after serving his two-year prison sentence.  Reference to this and additional biographical information may be found here:  http://www.poetryfoundation.org/bio/oscar-wilde.  Reference to Wilde's time in prison may be found here:  http://www.mr-oscar-wilde.de/about/p/prison_years.htm.

"To My Wife" is organized as a kind of ballad with three feet per line (except for the last line of the second quatrain which has but two).  The first stanza serves as an introduction that seems to state that a proper introduction is not possible.

At first glance, the second stanza expresses a romantic sentiment.  However, the poet's poems or "fallen  petals" are described as only having the potential to reach his wife's hair.  Note, they do not have the power to penetrate her skull to reach her brain and thereby be appreciated.  It is only when, in the third stanza, that hard times befall his wife, that she will be able to understand the true meaning of her husband's poetry.
Posted by Steven Wittenberg Gordon, MD at 4:33 PM