Poem of the Day: "If those I loved were lost" by Emily Dickinson

"If those I loved were lost" by Emily Dickinson is the Songs of Eretz Poem of the Day for May 30, 2014, with apologies from the editor for the tardy posting.  The poem is in the public domain and therefore legally reprinted here.  Dickinson's work has appeared many times in the Poetry Review; most recently here:  http://eretzsongs.blogspot.com/2013/12/review-of-its-all-i-have-to-bring-today.html, where may be found a brief biography, and here:  http://eretzsongs.blogspot.com/2014/05/poem-of-day-there-is-another-sky-by.html. 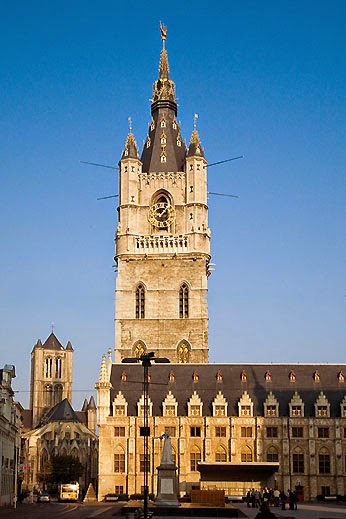 If those I loved were lost
Emily Dickinson

Did those I loved repose
The Daisy would impel me.
Philip -- when bewildered
Bore his riddle in!

Ah, the enigmatic Emily Dickinson!  The poem is arranged in two quatrains with three feet per line.  The end-words of the final stanza have assonance with, consonance with, or, in the case of the second line, exactly match the end-words of the first.  This causes the lines of the second stanza to fall kindly upon the ear and to produce the exquisite feeling evoked by the sound of a chord just about to be resolved.  The meaning of the poem, however, is a bit of a mystery.  Nevertheless, I offer the following.

The reference to the "bells of Ghent" in the first stanza most likely refers to the Belfry tower in Ghent (pictured) which was used as a watch tower, stronghold, treasure storage facility, and symbol of power.  One of the architects of the tower was Filips (Philip) van Beergine, to whom reference may have been made in the second stanza.  For reference to this and additional information, see http://www.trabel.com/gent/gent-belfry.htm.  "The Crier" probably refers to the village Crier, or perhaps refers to the literal act of shedding tears over loved ones lost.  "The Daisy" may refer to the child's game "she loves me; she loves me not," or, perhaps, given the capital "D" and equal number of letters, may be code for the "Devil."

The word "lost" in the first line likely means lost in the religious sense--a lost soul.  If those Emily loved were lost souls, news of their sins would eventually become common knowledge around town, perhaps announced by the village Crier.  However, if those Emily loved were "found" read "saved" in the religious sense, then their fine example would become known to all the world, as symbolized by the ringing of the bells in Ghent.

The second stanza is more enigmatic.  "Repose" may mean to be in a state of complacency or to be in danger of falling into sin.  In this case, Emily's fear of the Devil would move her to act to save her loved ones from his evil grasp.  The last two lines, I admit, baffle me, but may mean that a man in danger of sinning or "bewildered" might be wise to look "in" or "inward."  However, I am not sure.