Poem of the Day: "Meeting at Night" by Robert Browning

"Meeting at Night" by Robert Browning is the Songs of Eretz Poem of the Day and the offering from Poets.org's Poem-A-Day for May 3, 2014.  The poem is in the public domain and therefore legally reprinted here.  The poem was originally presented in two sections, "Night" and "Morning," and was first published in 1845 in the poet's Dramatic Romances and Lyrics. 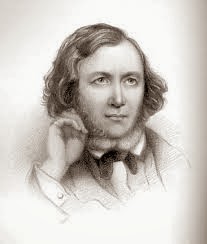 The gray sea and the long black land;
And the yellow half-moon large and low:
And the startled little waves that leap
In fiery ringlets from their sleep,
As I gain the cove with pushing prow,
And quench its speed i’ the slushy sand.
Then a mile of warm sea-scented beach;
Three fields to cross till a farm appears;
A tap at the pane, the quick sharp scratch
And blue spurt of a lighted match,
And a voice less loud, through joys and fears,
Than the two hearts beating each to each!

Robert Browning (1812 - 1889) (pictured) was known for most of his life as the husband of the more famous Elizabeth Barrett.  "Meeting at Night" was composed during their courtship--they were married a year later in 1846.  Eventually, Robert Browning achieved accolades of his own with the founding of The Browning Society in 1881.  Reference to this and additional biographical information may be found here:  http://www.poets.org/poetsorg/poet/robert-browning and here:  https://mail.google.com/mail/u/0/#inbox/145c1a60387a0a30.

What lady would not have swooned upon receiving "Meeting at Night" from her paramour?  The iambic pentameter lends a lyric feel, and the complicated rhyme scheme creates a delicious anticipation evocative of awaiting the arrival of a lover.
Posted by Steven Wittenberg Gordon, MD at 5:49 PM