Poem of the Day: "The Road Not Taken" by Robert Frost 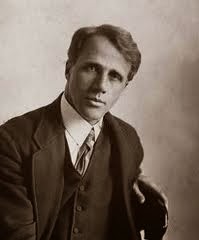 Robert Frost (1874 - 1963) (pictured) was known in his lifetime as the unofficial poet laureate of the United States.  President John F. Kennedy asked Frost to read a poem at his inauguration--an unprecedented request at the time--and spoke at the dedication of the Robert Frost Library at Amherst College (where this editor spent many long hours wasting his time studying biology and chemistry when he could have been reading poetry).  Reference to this and extensive additional biographical information may be found here:  http://www.poetryfoundation.org/bio/robert-frost.

"The Road Not Taken" is a lovely poem with a pleasant rhyme scheme about a walk in the woods that leads the speaker to a literal and philosophical crossroads and a fourth dimensional epiphany.  After a moment of contemplation, the poet chooses the path "less traveled by," eschewing the other more predictable, safer, surer path.  Suddenly, in a glimpse of the fourth dimension, he sees his future.  He sees that his life will be richer, fuller, and more memorable by dint of taking the less traveled path. 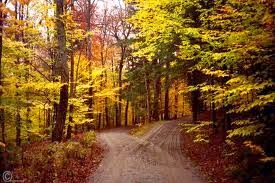 As I think back on my own life and contemplate my own future, it is clear that I, as most people do I suspect, usually took the safer path when at a crossroads.  That path led to a college preparatory program in high school, a pre-medical program in college, medical school near my hometown, and an internship near my medical school.  The path to so-called success.

However, it was the times that I took the "less traveled" path that made my life interesting.  Daring to ask out the glamorous law student and marrying her eighteen months later.  Doing my residency in Wisconsin instead of the surer thing of continuing in New York.  Defiantly opening my own solo medical practice and running it my own way.  Volunteering for active duty with the Air Force at the age of thirty-five and becoming a flight surgeon--flying as a rated aviator in F-15s, B-52s, KC-10s, and many other aircraft.  Moving to Kansas--which, to a New Yorker was like moving to the Wild West--and setting up a part-time practice out of my own home, sacrificing a higher income for the freedom to have time for poetry and family.  And marketing my poetry, starting an e-zine, and reading and reviewing poetry every day, even when the pull of "the road not taken" beckons.