Poem of the Day: "A Girl" by Ezra Pound 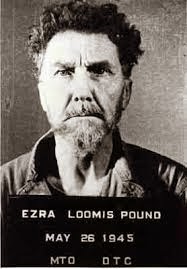 Ezra Pound (1885 - 1972) (pictured) is considered by many critics and fellow poets to be the most important driving influence in the establishment and preservation of modernist poetry.  He was the founder of the Imagist and Vorticist movements.  As an American expatriate in London and Paris, Pound was instrumental in establishing the careers of many until then unknown but later, thanks to him, famous poets and literary figures, including James Joyce, T. S. Eliot, and Robert Frost.  He did have a dark side, however.  During World War II, living in Italy, he was sympathetic to the fascist regime and became an outspoken anti-Semite.  Charged with treason, Pound was arrested and imprisoned by American forces in 1943 and later committed to an insane asylum until Robert Frost won his release in 1958.  He lived out the remainder of his life quietly in Italy.  Reference to this and additional biographical information may be found here:  http://www.poetryfoundation.org/bio/ezra-pound. 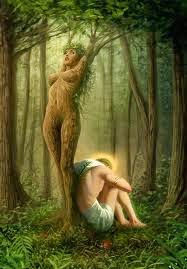 "A Girl" is arranged in two cinquains.  The first is straight-forward enough if understood as a commentary by Daphne as she is being metamorphosed into a tree at the climax of the Greek myth of Daphne and Apollo.

The second stanza is a bit enigmatic, a characteristic for which Pound's poetry was known and often lamented by Pound scholars.  The first three lines appear to be straight-forward as the girl, now a tree but still for the time being sentient, notices the other trees, moss, and flowers as if for the first time.  In the fourth line, the tree/girl then derides Apollo, referring to him as "a child."  The poem ends with the tree/girl calling Apollo's pursuit of her a "folly" and Apollo a fool for all "the world" to see.
Posted by Steven Wittenberg Gordon, MD at 7:39 PM