Poem of the Day: "My 71st Year" by Walt Whitman

"My 71st Year" by Walt Whitman (pictured) is the Songs of Eretz Poem of the Day and the offering from Poets.org's Poem-A-Day for May 31, 2014.  The poem is in the public domain and therefore legally reprinted here.  It was first published in Century Illustrated Monthly Magazine in 1889.  Reviews of Whitman's poetry as well as essays on his approach to poetry have appeared many times in the Poetry Review.  A brief biography of his interesting life may be found here:  http://www.poets.org/poetsorg/poet/walt-whitman?utm_source=PAD%3A%20To%20You%20by%20Walt%20Whitman&utm_campaign=poemaday_122513&utm_medium=email. 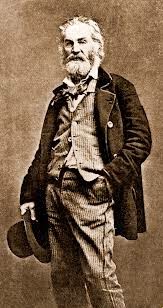 After surmounting threescore and ten,
With all their chances, changes, losses, sorrows,
My parents’ deaths, the vagaries of my life, the many tearing
passions of me, the war of ‘63 and ‘4,
As some old broken soldier, after a long, hot, wearying march, or
as haply after battle,
At twilight, hobbling, answering yet to company roll-call, Here, with vital voice,
Reporting yet, saluting yet the Officer over all.

Whitman's reference to his age as "threescore and ten" may be a nod to his hero, Abraham Lincoln, who used similar language in his famous Gettysburg Address.  This is further supported by his reference to the Civil War, "the war of [18]'63 and '4."  Tired, old, yet still "vital," Whitman proudly proclaims that he is "Here," if not to the people of the world that may have forgotten and dismissed an old man, but to God, "the Officer over all."
Posted by Steven Wittenberg Gordon, MD at 2:06 PM