Review of "Thoughts" by Walt Whitman

Walt Whitman (1819 - 1892) (pictured) is widely considered to be one of America's most important poets.  Songs of Eretz has done reviews of and made reference to his extraordinary body of work on many occasions; and, as previously announced, I am presently enjoying an edX MOOC on Whitman.  A brief biography of his interesting life and career may be found here:

"Thoughts" is divided into seven numbered parts.  Long lines of free verse are employed, typical of this poet. 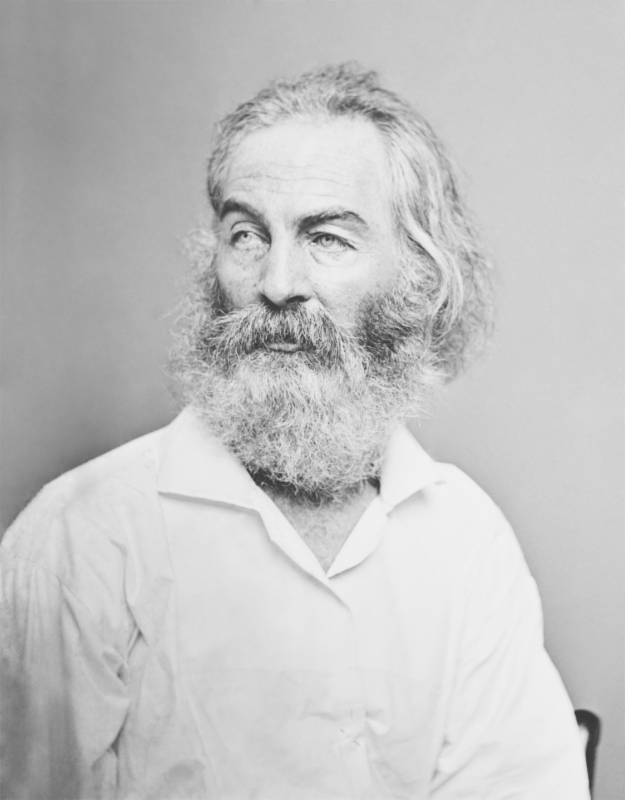 In part 1, Whitman muses about the outward appearances of his fellow beings, not only how they appear on the surface but how they are underneath.  Whitman concludes that there is beauty even in ugliness; that the famous and unknown are equally to be valued; and that ultimately, anyone is capable of being as wise a a judge or as vile as a criminal--even the President.  Whitman uses anaphora to drive home these points.

In part 2, Whitman experiences what I like to call a fourth dimensional moment.  He ponders the byways and ecosystems of the earth and finds that life moves ever forward and will continue to do so.

In part 3, Whitman derides people who are full of themselves over their own good fortune, wealth, or education.  Far from being superior to their less fortunate fellows, Whitman sees these elitists as vile, "full of the rotten excrement of maggots."

In part 4, Whitman comments on ownership, equality, and justice.  Here we see Whitman the Herald of Democracy as he praises Natural Law and equality of opportunity (not of outcome).

In part 5, Whitman recalls the tragic sinking of the SS Arctic (pictured), an event which shocked and captured the imagination of the nation in 1854.  About 350 souls were thought to have perished at sea--an appalling number for that time.  Worse, with the exception of the brave and heroic Captain Luce, the crew acted despicably in the emergency, saving themselves and allowing almost every passenger, including every woman and child, to perish.  Additional information about the fate of the SS Arctic may be found here:  http://history1800s.about.com/od/steamships/a/wreckofarctic.htm.

In part 6, Whitman engages in his typical braggadocio, boasting that his poetry will outlast nations, heroes, and even history itself.  History may be written, rewritten, or even lost, but Whitman believes he will endure.

In part 7, Whitman acts as an impartial observer of the behavior of the masses.  The masses, he observes, follow and put their faith in leaders who do not value them as men.  Sadly, this tendency has not changed.