Review of "The Bee" by James Dickey

"The Bee" by James Dickey was offered by Poets.org's Poem-A-Day on February 2, 2014, the anniversary of the poet's birth.  A link to the poem may be found here:  http://www.poets.org/viewmedia.php/prmMID/23859.

James Dickey (1923 - 1997) (pictured) was a writer, guitar player, athlete, war hero, hunter, and woodsman, perhaps best known for his novel, Deliverance (1970), which was made into a major motion picture.  However, it was his role as a poet that was personally the most important to him.  He served as the Poetry Consultant to the Library of Congress from 1966 - 1968, a post that later became the office of the Poet Laureate of the United States.  He read at President Jimmy Carter's inauguration in 1977.  Additional biographical information may be found here: 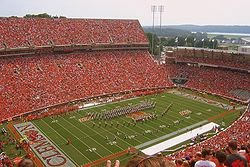 "The Bee" is dedicated "to the football coaches of Clemson College, 1942."  Dickey played varsity football at Clemson College, but left prior to graduating in favor of enlisting in the Army Air Corps in 1942.  Also in that year, Frank Howard Field at Clemson Memorial Stadium (pictured) was dedicated http://en.wikipedia.org/wiki/Memorial_Stadium,_Clemson.

The "son" in the poem refers to one James Dickey's own sons, Kevin, and the poem was inspired by an actual incident that happened when Kevin was six years old.  In a presentation at Clemson College in 2004 http://www.clemson.edu/cedp/cudp/scr/articles/scr_37-2_dickey_poet_persp.pdf, Kevin Dickey revealed that a bee came out of the woods, scared him, and that he reacted by running into a street where, were it not for the quick reflexes of his father, a truck would have hit and probably killed him.

The poem is about the superhuman powers that fathers possess in the minds of their young children.  It is also about the expectations that coaches have for their charges and the disappoint experienced by both parties when those expectations are not or cannot be met.  Also present is the concept of sports as a metaphor for life.