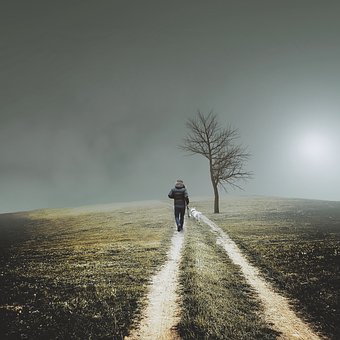 Esteem the wanderer
For alone does he recognize
That in the fulfillment of destiny
Is our purpose obtained
Though our feet may be called
To endure the agony of the miles
It is a calling we may not quit
A journey we must take
Though no map, no road
Charts its course

Poet’s Notes:  I do not remember all the details of when I penned this poem, which was probably on the subway, but nevertheless I can explicate its theme.  I distinguish between the notion of fate and destiny philosophically and literarily.

By fate, I take the unfolding of one's life, the chance and fortune that governs so much of our earthly time. In contrast, I take destiny to be the telos of our life, the purpose that compels our inclinations and fulfills the desires with which our souls sing most in harmony.

In this sense, our fate and destiny can tragically be at odds.  For instance, the man who is destined to be a runner who becomes paralyzed is forbidden by fate to fulfill this purpose. This is not to say that perhaps he does not have some other destiny that now can come to pass, but it will not be his initial one.  One can indeed lose the opportunity for one's destiny to flourish. Not every life is happy.

It is upon this notion that the poem is built. The wanderer is taken as exemplifying the call of destiny, as a figure who has allowed his greatest inclinations to guide his life through a long and uncertain journey, even at the expense of being a figure who historically has been viewed with highly unfavourable connotations. The poem takes an anonymous narrator telling us to esteem this figure in spite of these connotations, for he is truly listening to the stirrings of his heart. The poem concludes in a separate stanza with a prayer that we too may be so brave as to embrace our destiny.

I am especially fond of the verse that reads, "to endure the agony of the miles".  I wrote this on account of my flat feet. So often my own wanderings have left me with the reverberating ache of miles walked. Thankfully, I've found some really comfortable brogues that help, but the pain is worth it anyway.

Aesthetically the poem is simple, but I was always wondering if I should change or add something to it. Instead, when it came time to polish it, I decided to more or less keep it as it was.

Editor’s Note:  I find this poem at once inspirational and sobering--more the former than the latter, but nevertheless heavy enough on the latter to make an interesting contrast.  I enjoy the way James makes the wanderer--often disparaged as he points out in his notes--into a hero, or at least an anti-hero.  I also identify personally with this poem, having lived in eight different states over the first sixteen years of my marriage--not counting temporary duties yonder with the Air Force.  “A wandering minstrel I....”
Posted by Steven Wittenberg Gordon, MD at 6:06 PM