In spring, 2017, I spent a bit over a week in Ireland, from which my ancestry is partially drawn by way of my grandmother's grandmother (the percentage is small, the connection deep).  Amongst the favourite parts of my journey was going to Connemara--a spectacularly beautiful and profoundly rugged place. While taking the coach from Galway to Kylemore Abbey, I saw something that immediately inspired me--a stunted, gnarled tree, that sprung up just slightly behind a rise in the land, giving it partial shelter from the wind. Given the climate, large areas of Connemara are treeless, with rocky ground suitable for grazing, but this tree, which was secluded from the nearest one by at least a quarter of a mile, had grown and survived alone amongst its fellows in this little nook. Its entire being was shaped by the wind, till its trunk and branches itself were as if the wind had been frozen into wood. 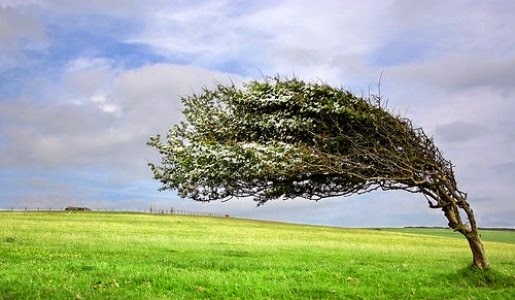 Poet’s Notes:  My only regret is that I do not have a picture of this tree, though I suppose I have something even better--a poem. My purpose was to capture how the tree appeared to me in those fleeting moments I saw it as I passed by, touched by what it was and how it lived.

Editor’s Note:  James originally submitted this one as a haiku accompanied by notes, but the notes were so wonderful, lyrical, and filled with imagery that I wanted to feature them more prominently as the prose portion of a haibun, followed by the haiku.  James politely acquiesced to my desire, and this haibun is the result.
Posted by Steven Wittenberg Gordon, MD at 3:29 PM