"A revelry of evening" by Idan Cohen

Songs of Eretz Poetry Review is pleased to present “A revelry of evening” by Idan Cohen.  Idan lives in Israel where he works as a writer, laborer, gardener, and caretaker.  Contact him at IdanWCohen@gmail.com.

A revelry of evening
Idan Cohen

Of course it's quite fetching how the hair
on the head of the gracious waitress in the black miniskirt
Swishes, but by sheer inherent universal malice it now swishes too far, and the
great glimmering arc of it, reflecting the dark bar's neon lights, hits the
glass on her tray, reflecting the neon lights, which then spills,
waterfalling in a foamy rush to the floor
and to an ultimate final smash.

Then the customary applause.

Her face shows no dismay.
A man takes the opportunity
to place a quiet, unopinionated hand on her bottom.

Another’s eyes are flickering as he eyes her bare backed top bare back
a wash of adrenaline makes him feel quietly, powerfully, incipiently, beastly. 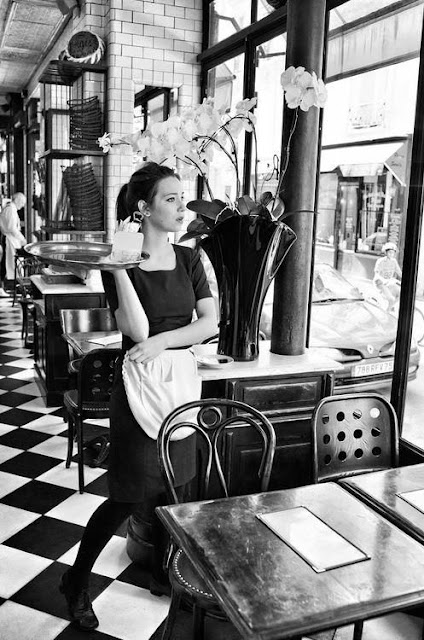 She finds herself thinking of the serial number of the
queen size bed on the floor of the student apartment she shares
with three creative types who leave her a full
sink every morning and
write her poems in the evening.

the serial number of the queen sized bed is BL11046G. The tag
She could not avoid reading, with oddly serious fears
of the consequences of the tearing of tags
on which are written: 'DO NOT TEAR!'

The spilt beer forms rivulets and
creeks in the pitted bar floor,
and someone is still missing his drink. She is
thinking, holding the tray;

poems are not worth washing dishes.

the price of a queen sized bed is absolute surrender.

Everyone would leave if they could.

Eventually, the unassuming hand which cups her bottom
will release itself, after a final grasp. Oh Unknowable Hand!

The man enjoying the sight of her back continues to.
And is there anything wrong with that? In his poor lost eyes
she is beautiful.

And she is stubborn, and
blood will not cease pumping for despair's sake.
In the depths of her entire self,
the most marvelous escape plans are concocted--

and tonight, she thinks, going to get a broom,
tonight she'll tear that damn tag.

Poet’s Notes:  Strangely enough, I composed this poem in 2006. Like its protagonist, it has been through a thing or two. It was definitively touched up around 2016, but a few things were there from the start: the swishing hair, the lecherous stares, and that damn tag.  I worked a while as a waiter and can well recall the sensation of being an unappreciated servant like our heroine.

I believe everyone would leave if they could. Leave their jobs. Leave their masks. Leave their acceptance of this lily-livered life. Go and live the way life is meant to be. Somewhere else. But few dare. Perhaps it’s not even feasible. Perhaps there's nowhere unspoiled left to go.

At the least, we can change our tactics. We can stand obstinately against what we're told is right or wrong. We can tear out tags, even if they do say DO NOT TEAR on them. This poem is a salute to every soul that rebels.

Editor’s Note:  What a haunting tale filled with dark, stark, yet beautiful imagery.  The use of the tag as a metaphor for oppression is clever, as is the tiny planned act of rebellion at the end.
Posted by Steven Wittenberg Gordon, MD at 9:11 PM