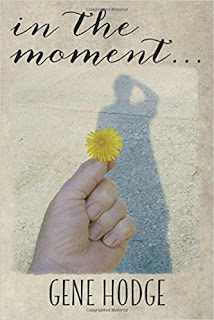 I had the pleasure of reading in the moment, a poetry collection by Gene Hodge (Soddy-Daisy, Tennessee, 2015).  It contains ninety-four poems densely spread over eighty-eight pages.  Hodge is a member of the Chattanooga Writer’s Guild and International Bureau of Electrical Workers.  He is also a professional entertainer who performs throughout the south and northeast.  He hails from Soddy Daisy, Tennessee.  A previous appearance in the Review may be enjoyed here http://www.songsoferetz.com/2017/02/antiques-wedding-and-three-flat-tires.html.

Hodge reads like a modern-day Walt Whitman, albeit he eschews the use of the long lines for which Whitman is known.  Like Whitman, Hodge is unabashedly full of himself but in a completely innocent and unconceited way.  The title of his collection is quite apt, as each poem finds the speaker, most likely Hodge himself, immersed “in the moment” of the narrative.

The subjects of the poems in the collection range from romantic love, life, death, change, and profound observations about simple things.  Even his saddest poems end with a ray of hope.  For example, “Pop,” an elegy to his father, ends with, “I know he is happy here on the mountain / he loved so.”  (The poem is reprinted below in its entirety with the poet’s permission).

Another poem, “Let Him Go,” told by a speaker whose brother is terminally ill, similarly focuses on the positive rather than deteriorating into a simple lament.  The speaker leaves his brother’s side to pick blackberries, only to come to the realization that, “Hey, the blackberry season is over. / Why bother?”  This is soon followed by, “My brother’s season is coming to a close. / It is time we accept it....”

The collection includes many shorter poems, some only five or six lines, but these are no less profound for their length.  One of my favorites, “The Crow Is My Friend,” contains only six lines.  The subject is a crow that the speaker passes each morning.  They observe each other and have come to a beautiful understanding.  The poet could, I am sure, discuss this relationship at length.  Instead, he concludes in his sixth and final line with a clever play on words that, “Friends don’t need to crow,” which really says all that needs to be said.

Hodge has reminded me that there is beauty and good to be found in almost every situation and that every moment of life should be cherished and held as sacred.  I had forgotten that in my life and in my poetry of late.  So, if life has trodden you down and you have forgotten that too, I strongly encourage you to pick up Hodge’s collection and get back “in the moment.”

A paperback copy of in the moment may be had from Amazon.com for $12.95 https://www.amazon.com/s/ref=nb_sb_noss?url=search-alias%3Dstripbooks&field-keywords=in+the+moment+by+gene+hodge.  The collection would make a wonderful Christmas gift, especially for someone down on his or her luck and who needs a bit of cheering up. 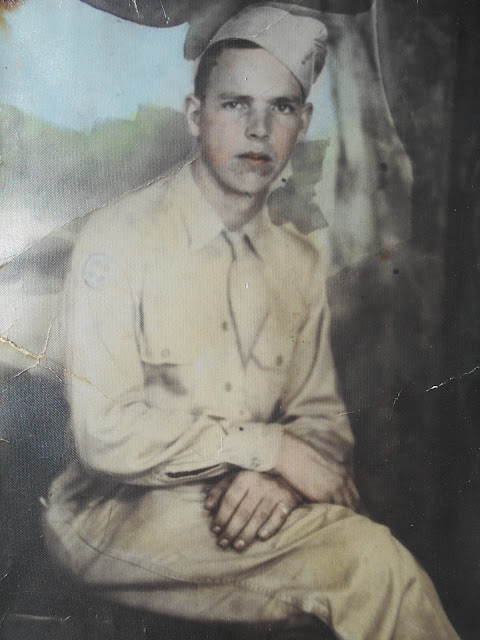 The phone rang at three a.m.
A chill, darker and deeper than the morning’s stillness
erupts within my stomach.
My wife answers,
turns to me and whispers. . . ,
“He’s gone.”

For a moment, the silence overtook me.
I saw him, not there, lifeless in a hospital bed,
ninety-two years old.
But twenty-two, full pack, iron helmet and rifle,
courageously riding the waves in a Higgins boat;
the doors to drop down
upon the beach at Normandy.
I hear his heart, like thunder over his comrades praying and crying;
see in his eyes, the fear of knowing that
hell is only moments away.

I recalled his look of sadness and hopelessness,
as the medical team lifted his frail body into an ambulance.
The wind of many miles ruffled his silver hair
as they closed the door.
I wept, as I told the driver
the terror he faced in the war,
how young and proud he was
to now be reduced to this worn-out body of flesh.

Here I stand . . .
looking down upon the grave where he sleeps.
I know that he is happy here on the mountain he loved so.
My heart, heavier than the stone above his head, breaks
and the earth trembles beneath my feet.

Poet’s Notes:  My father (pictured) was a gentle soul, a quiet man with an air of mystery about him.  He, like many other veterans, spoke little of the war.  If asked, his only reply was that he was in the Army.

After his demise, I found locked in a cedar chest a book and map describing in detail the maneuvers and battles of the Cannon Company, 320th Infantry as they forged across the European theater of operation.  This poem is a tribute to a silent hero who never claimed fame; who fought and lived that others might live; to give me this golden moment to say to the world, “I am proud.”

Editor’s Note:  Elegies are usually a hard sell as they are so specific to the deceased and those known to him or her, but Hodge has captured a certain universal quality with this one, one that made me think of my father and how he looked so dashing in his military uniform.  Will my son one day think of how I looked in mine?
Posted by Steven Wittenberg Gordon, MD at 10:17 AM