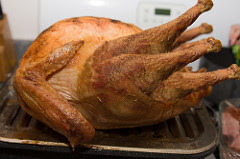 Served, Dad gave his leg to mom
Mom renounced the leg to Brother, who would accept
Licking his lips, but Grace stared at the second leg
When she found it on her plate

She'd been told to say thanks, but
Also taught to show, so before the bird grew cold
She split shares for mom and dad, handed them over
Ate the spare meat on her bones

Poet's Notes: This is a poem obviously inspired by Thanksgiving. On a more personal level, my mom’s, and dad’s, and my love for drumsticks inspires it. Whether dealing with whole chickens or turkeys, it can be a bit of a dilemma. My family and I never thought about cutting the meat from the bone and dividing portions, but in hindsight that would've been a great solution; instead, a bucket of drumsticks was used to form a truce.

Editor’s Note:  In my family, white meat turkey was preferred, and the drummies and thighs often languished.  When I married, I was shocked to find that a preference for white meat was not universal, as my wife and her family prefer dark meat!  So, when not having turkey with my in-laws, my wife enjoys all of the dark meat (one of the many ways my wife and I compliment each other).  However, to appease my wife’s family when feasting with them, we do the same as Sierra’s family by cooking up extra drumsticks.
Posted by Steven Wittenberg Gordon, MD at 12:01 PM