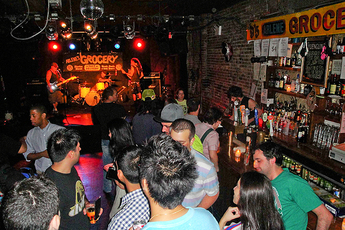 Your magnetic force is an attraction
At 3 am my steps are drawn to you
1st and 1st – and all the way down
A and B, alphabet city
The fear has vanished from your streets
Replaced by bars beseeching me
To quaff a nightcap
In commemoration of the night's mischief
and my own

My last call prayer:
Lower East Side
Wherever I am, whatever I'm doing
Let my night end with you

Poet’s Notes:  “Lower East Side” is a simple poem about my favorite place to end the night.  I wrote this originally for the Lower East Side festival but I never heard back from them, so I assume that an audience there never heard it. Regardless of my reception (or lack thereof) from the LES festival, I think this is a fine poem that speaks about exactly what I love about the LES--that it is an excellent nightspot.

Back in the day, the LES was pretty dangerous. Shooting galleries lined the streets, and you were likely to be robbed or worse walking down any street in broad daylight; and had you gone there at 3 am, when I roam the streets on a pretty regular basis, you would have been signing your own death warrant. When I was about four years old, my grandma had a dentist in Alphabet City (the lettered avenues East of 1st avenue).  I remember her tightly holding my hand and telling me to stay close to her, fearful that we'd find some trouble on the quick walk from the bus. Nowadays, it is all cleaned up, and though it's lost some of its old charms as a consequence, it is still an incredible place for all the bars, restaurants, shops, and other venues that stay open late.

This poem is a love letter to the neighborhood and the mischief in which I entangle myself in this area. The aesthetics are simple and to the point. It really only took me a few minutes to write this poem, and so it represents, I think, an authentic feeling for what I love about this area so much.
Posted by Steven Wittenberg Gordon, MD at 9:06 AM