Poem of the Day: “Under the gazebo’s roof” by David C. Kopaska-Merkel

Songs of Eretz Poetry Review is pleased to present “Under the gazebo’s roof” by David C. Kopaska-Merkel.  Dr. Kopaska-Merkel studies the diverse part of the Earth called Alabama. He belongs to the Ganz tribe of the Glass folk, who wander the land in search of their lost transparency.

Kopaska-Merkel has written myriads of poems, stories, and essays since the ‘70s. His writing has appeared in Asimov's, Strange Horizons, Night Cry, and scores of other venues. He won the Rhysling Award (Science Fiction Poetry Association) for best long poem in 2006 for a collaboration with Kendall Evans. He has written twenty-three books, of which the latest is Luminous Worlds, a collection of dark poetry from Dark Regions http://www.amazon.com/Luminous-Worlds-David-C-Kopaska-Merkel/dp/193712892X/. Kopaska-Merkel has edited Dreams & Nightmares magazine since 1986. DN website http://dreamsandnightmaresmagazine.blogspot.com/. @DavidKM on twitter. 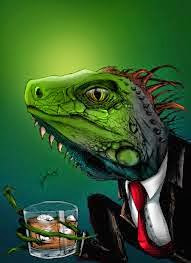 In my dream,
The elbows of my coat are eaten out,
But no one seems to notice the ragged holes.
The guests dip their faces into the tepid punch;
They come up pink and dripping, licking their lips.
I will leave the party soon.

Later, I sit in the ruined gazebo, playing cards.
“In the desert,” begins the iguana, “socialists are rare.”
I think of solitude and heat,
While rain spatters weathered planks, my hair, my shoulders,
The iguana's cracked and dusty hide.
In my dream, the house is silent now;
The party will be over soon.

Like endolithic vikings who have forgotten even their names,
The iguana and I sit, motionless, under the gazebo's roof.
Our thoughts leach out like water-soluble dye and
Soak into the floor.

Poet’s Notes:  In my mind this poem relates to my doctoral adviser and field research on trilobites in western Utah. This despite the poem's near-total transformation into an homage to Michael Moorcock's Jerry Cornelius novels and other psychedelic SF I read back in the ‘70s and ‘80s.

Editor’s Note:  I enjoy the Lewis Carroll-like mood and imagery here--an acid trip without the risk of having to drop it.  "Under the gazebo's roof" was previously published in Dreams & Nightmares 22 (1988), underfoot (chapbook, 1991), and in the August 2014 issue of Songs of Eretz Poetry E-zine.
Posted by Steven Wittenberg Gordon, MD at 3:43 PM