Poem of the Day: “Soul of California” by Ross Balcom

Songs of Eretz Poetry Review is pleased to present “Soul of California” by Ross Balcom.  Mr. Balcom lives in southern California. His poems have appeared in Beyond Centauri, inkscrawl, Outposts of Beyond, Scifaikuest, Star*Line, and other publications.  He is a frequent contributor to the Songs of Eretz venues. 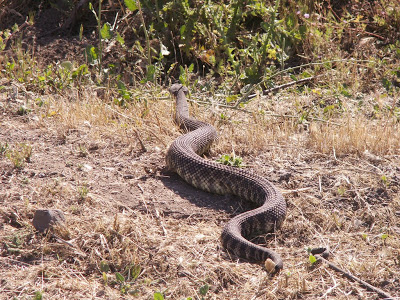 i.
drowned surfers
crawl from the sea
to rape your daughter

v.
celebrities
on the red carpet
sniff each other's asses

Mission San Muerte
Jesus beats an Indian
to his knees

viii.
the Golden Gate
instant satori
as you leap

ix.
the freeway
hurtles you
to infinite traumas

x.
a rattlesnake
crosses the trail
soul of California

Poet's Notes: I have stared long into the abyss of the "Golden State." This poem offers a survey of it. Darkness without end.

Editor’s Note:  The poet captures the essence of the seamier side of California without resorting to cliche.  There is a fresh, biting satire to each haiku-like stanza that really sings.  The image of the snake in the final stanza is stunning.
Posted by Steven Wittenberg Gordon, MD at 10:18 AM