"That Edge" by Christopher Hivner 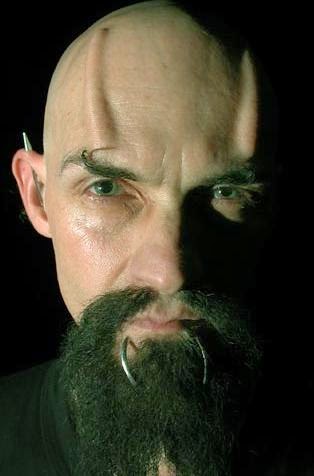 “I know, I’m going to hell,”
my friend always says
after telling one of his jokes
that make me laugh
and cringe
at the same time.
He gets away
with saying things
I never could.
I wonder sometimes
if I secretly
want to be him,
just for a moment,
to exist inside
that edge,
feel the blade
slice my skin
and draw blood.
Someone pours alcohol
in the wound
to punish me
for my sin,
but I don’t repent.
I laugh harder
than everyone else
feeling my horns
form under the skin.

About the Poet:  Christopher Hivner writes from a small town in Pennsylvania surrounded by books and the echoes of music. He has recently been published in Eye on Life Magazine and Black Mirror Magazine. A chapbook of poems, Adrift on the Cosmic Sea, was published in 2014 by Kind of a Hurricane Press.

Poet's Notes:  I have a friend with a wicked sense of humor. It’s fast and cutting and sometimes not politically correct. Whenever he drops one of these bombs I first find myself laughing. Second I scold myself for finding a joke so out of bounds so funny, and third, I wish I had said it.  I wish for just a moment that I had the temerity to release an edgy comment into the world and not care what anyone thinks.

Editor's Note:  Hivner has really captured the jealousy that perhaps all of us lesser beings feel compared to the charismatic few.  His title is perfect, and his metaphors are spot on.
Posted by Steven Wittenberg Gordon, MD at 3:26 PM