"He Sleeps" by Ellen Denton 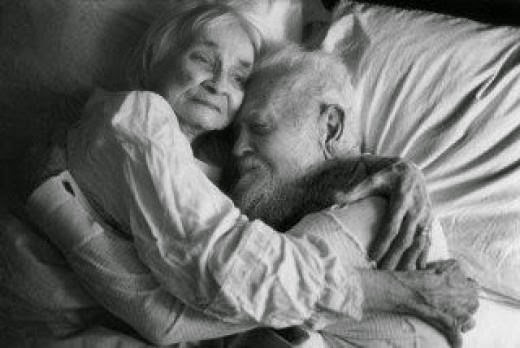 He sleeps.
She holds his hand,
flips pages
of an album with
her other hand.

On bedside table,
family photos shielded
protectively in glass,
smile from a vanished
past, pasted like
pressed flowers
into each frame.

Married 65 years,
he sleeps, while
she holds his hand,
his face crumbled ash
on the pillow, as Cancer
eats its last.

She holds his hand.
He sleeps,
a long, slow sleep
with dreams,
in sweet, cold,
dwindling moonlight.

About the Poet:  Ellen Denton is a freelance writer living in the Rocky Mountains.  Her short stories have appeared in numerous magazines and anthologies covering a spectrum of fiction genres,  including a number of professional rate paying publications, with more slated to be out in upcoming editions. She has a long term love of poetry and was one of the shortlisted finalists for the PK International poetry competition, and has had verse that appeared in a Binnacle publication, earlier in Songs of Eretz Poetry Review, and others.

Poet’s notes:  The inspiration for this poem was simple: A woman I know sat by her dying husband’s bedside holding his hand.  When she told me about it later, I the image of that squeezed my heart with pain.