Poem of the Day: “Mary Shelley's Notebook” by Marge Simon

Songs of Eretz Poetry Review is pleased to present “Mary Shelley's Notebook” by Marge Simon.  Ms. Simon edits a column for the Horror Writers Association (HWA) Newsletter, "Blood & Spades: Poets of the Dark Side," and serves as Chair of the board of trustees.  She is a former president of the Science Fiction Poetry Association (SFPA) and a former editor of Star*Line, the journal of the SFPA.

She was awarded the Bram Stoker for Best Poetry Collection twice--once in 2007, and again in 2012.  Both of her 2010 poetry collections, Unearthly Delights and The Mad Hattery were Stoker finalists in 2011.  She won the Strange Horizons Readers Choice Award in 2010, and the Dwarf Stars Award in 2012.  She won the Rhysling Award for Best Long Poem in 1995.

In addition to the frequent appearances of her poetry in the Songs of Eretz venues, Simon's poetry, fiction, and illustrations have appeared in Strange Horizons, Niteblade, Daily Science Fiction, Pedestal, Dreams & Nightmares, and Jamais Vu.  She has published two prose collections: Christina's World (Sam's Dot Publications, 2008), and Like Birds in the Rain (Sam's Dot, 2007).  Elektrik Milk Bath Press published a new collection of her poetry with Sandy DeLuca, Dangerous Dreams, in 2013.  Dark Renaissance Press published a speculative dark poetry collection, Sweet Poison in 2014 coauthored by her and Mary Turzillo.

Marge Simon is an active member of the HWA, Science Fiction & Fantasy Writers of America (SFWA), and SFPA.  Find more information about this remarkable lady at www.margesimon.com. 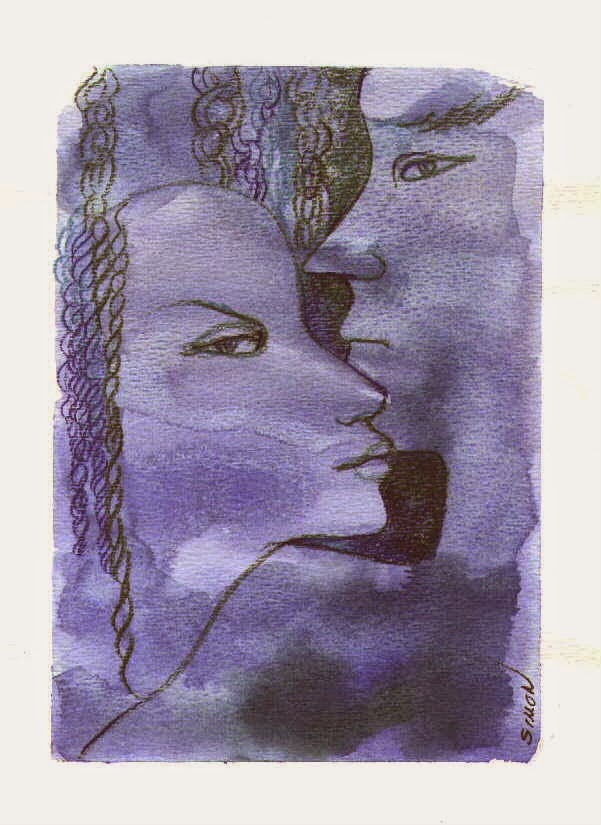 I read your book.
I want to know you, Mary.

I pretend we are the same,
playing hostess to these men.
How does it feel,
a tidbit of light banter,
polite and politic?

For a basket of sauterne and camembert
a mere merci bien, madam,
exchange of winks between the pair,
to be afterwards ignored
on a Grecian beach.

The breeze in your hair,
watching the waves break
one by one, Mary,
anonymous as relationships.

George rolls over,
eyes on Cape Sounion,
utters lines destined for posterity
something about the ocean,
how passages of fleets
leave no impression.

Do you recall how many times
he's propositioned you?
Your husband didn't hear
George's whisper in your ear,

But that was years ago.
Percy laughs, claps his pale hands,
never straying far from his umbrella.
For a man so fair, the sun is not his friend.
Yet his friends are yours, he's said.
He wants to share.

And what of you, Mary?
Quite a feather in your cap.
Not in your father's eyes,
he's disowned you,
mistress of a married man
of lively wit and former fortune.

Did you sit apart in the other direction,
jotting ideas on the pad you keep
in the secret pocket of your frock,
as I have done so many seaside afternoons
watching for distant lightning?

But that Mary isn't you,
an educated woman, treated with esteem.
It's me, this Mary, scribbling in my little book.
No brilliant poets on this beach.
My husband takes his comfort with the men.

I finger the letter, the crisp check
with it crackles in my pocket.
The acceptance came this morning
while he was away but I've not told him yet.
It might surprise him, Mary.
But will he treat me any differently?

If you were here, Mary, we'd celebrate.
But enough of fantasies, my friend.
I unpack the basket, spread the cloth,
share my conversation with the gulls.

Poet’s Notes:  This is one of my own personal favorite poems, which I had yet to find a market for until Songs of Eretz.  I'd always been fascinated by Mary Shelley, writing her book about a monster (who is actually the poor victim of a true monster, Dr. Frankenstein).  All right, here is Mrs. Shelley, midst a group of brilliant poets of the day. I doubt that she had servants galore and time to spare, but she made the time to write her hugely successful novel while minding their children, managing their home.  Surely she also attended to the needs of her husband, known as one of the finest lyric poets of his time. As well, she played hostess to his pals, George Gordon, Lord Bryon, famed for his lengthy narrative poems, and John Keats of the sensual imagery and odes. Leigh Hunt was also a friend and fellow poet.

Shelley didn't achieve fame until after his untimely death. Still, the boys must have gotten on well together as men of letters did back in the day. What of Mary while they were off for a smoke and brandy in the sitting room or a picnic on the beach? What was she doing?

I imagined she was not often part of their conversations. I imagined her as quiet, in her place, being a woman of those times. And so you have this poem through the eyes and in the words of another Mary, over a century later.

Editor’s Note:  I love the way Simon creates such a magical mood here, melding past and present seamlessly as the story in the poem unfolds.  An easy read on a complex subject, “Mary Shelley’s Notebook” should certainly resonate with authors and poets, but it still has the universal appeal necessary to be enjoyed by a much wider audience.