Poem of the Day: “Sounds on a Lover’s Night” by Guy Belleranti

Songs of Eretz Poetry Review is pleased to present “Sounds on a Lover’s Night” by Guy Belleranti.  Mr. Belleranti writes fiction, non-fiction, poetry, puzzles, and humor for both adults and children. He has been published in: Woman’s World, Crimestalker Casebook, Bards and Sages Quarterly, Liquid Imagination, Big Pulp, The Saturday Evening Post, Highlights for Children, Scifaikuest, Every Day Poets, and many other places. Two of his flash mysteries were nominated for Derringer Awards, and he has won cash awards in many writing contests. His website is www.guybelleranti.com/ 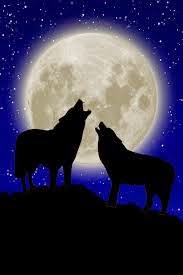 Don’t huddle under the covers.
That sound is only the wind
rattling the skeletal branches
of dead and dying trees.

Don’t tremble beside me.
That sound is only the wolves
enjoying the moon
in all its fullness.

Don’t cover your ears.
That sound is only my claws
scraping across the floor.

Poet's Notes: “Sounds on a Lover’s Night” was inspired by a variety of things, including:  the sounds in the bushes and sounds outside my tent while camping, coyotes in the wash behind my house, and a healthy dose of old classic horror films.

Editor’s Note:  This one gives me goose bumps!  And what do you think happened during the glaringly missing “fourth” line of the final stanza?  Yes, it is much more horrifying to leave the phantom “last line” to the reader’s imagination.  “Sounds on a Lover’s Night” was originally published by Midnight Echo magazine in its February 2011 issue and was reprinted in the premier issue of Songs of Eretz Poetry E-zine in August 2013.
Posted by Steven Wittenberg Gordon, MD at 5:23 PM