"Second Sight" and "Written in – and to be performed in – the style, or an approximation of the style, of Billy Collins" by Carolyn Martin

There is a kind of belonging to seeing the same sight twice.
—Sage Cohen, “The Word is the Way” 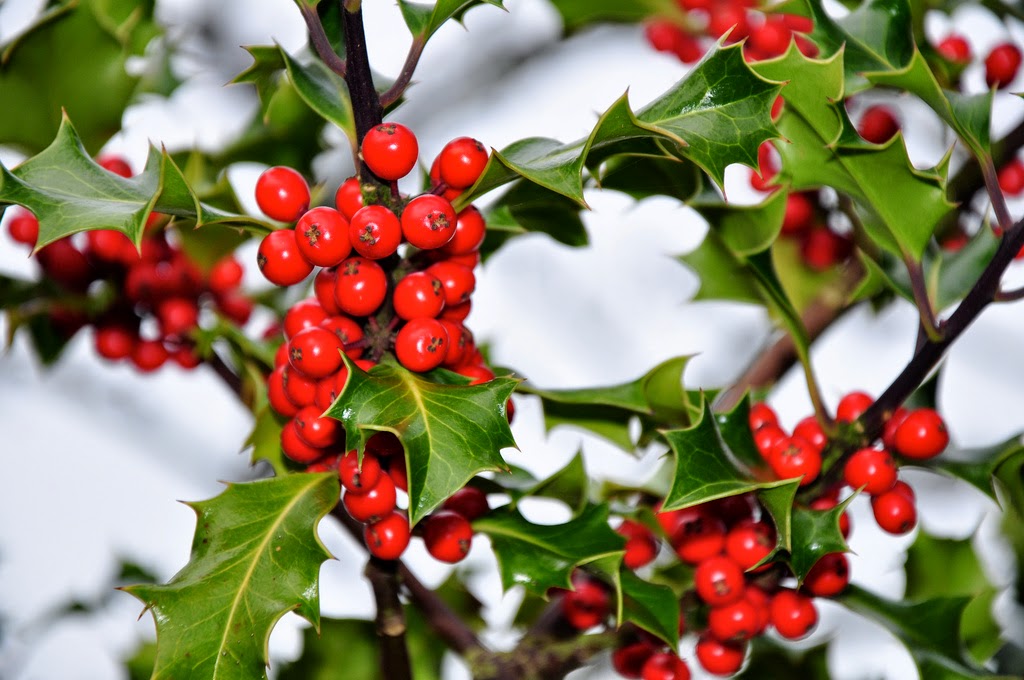 I missed first sight. The holly berried
in the trees was there last night. There, I’m sure,
scores of years before – sharing slits of light
and shade and cooling dark. One-fifth the size
of Douglas firs sentried on a dead-end street,
it rushed a call, Look at me! Choose me!

But I was blind to worlds beyond the words
inside my head. I could not see one bush
holding up two trees. Perhaps not holding,
but leaning in – like lovers whose day
grows out of hand and home waits miles away.
I was weighing other imagery:

bright lights around a coastal curve; a cat
caught stalking migrant birds; my lone car key
asleep inside my trunk. Each paced my feet,
belonged to me. But not one phrase would shape
a line, not one image tune my walking time
to poetry. Dead-end, they offered me.

I’ve been stalled before. Wandered lost around
the weighted earth. Belonged to dusk and dew.
Leaned on sages who would claim they knew –
beyond the insecurity of chance –
the holly stands alone tonight, waiting –
like grief or love wait – for a second glance.

Written in – and to be performed in – the style,
or an approximation of the style, of Billy Collins

Before the canvas, he brushes words.
Blue sky, red bandana, green boat, a thin pole
to fish the Susquehanna in July. Although,

he admits, he’s never fished the Susquehanna;
perhaps, doesn’t even like fish, July,
or red bandanas. I like Billy Collins. Actually,

not the man Billy Collins whom I’ve never met
except on YouTube with his balding head,
half-smile wit, and perfect words pointing

to themselves and, sometimes, to other things.
Nor the Billy Collins who can mesmerize an audience
with verbal acrobatics and flying twists

that make me want to cry, How does he do this?
in his drab suit-coat, no tie, and black glasses
he yo-yo’s from podium to nose.

Rather, it’s the poet who urges me to stand
at my window each sunrise—although the sun
doesn’t really rise in my backyard.

It staggers through stands of Douglas fir,
55 minutes after the newspaper says it should.
It hesitates, then shyly appears. Anyway,

as I was saying when sun popped in,
he wants me to ensure the neighbor’s cat
has not made its presence smelt

in flower beds near my back fence;
and that someone is sitting at my table
waiting to listen to my poetry

over cereal bowls – or, in my house,
over spelt bread spread with coconut oil,
a healthy alternative to corn syrup
and other suspect things corporations hide
on well-stocked shelves. Which is not to say,
raw milk wouldn’t sit on his table

near a bowl of organic berries cultivated
on the banks of the Susquehanna
by fishermen’s wives, particularly

those who hate fishy red bandanas
and slime-green boats – while they wait
for men with thin poles to row a sunset home.

About the Poet:  After sixteen years in academia and twenty-four in the business world, Carolyn Martin is happily retired in Clackamas, Oregon where she gardens, writes and plays with creative friends. Her poems have appeared in journals such as:  Antiphon, Stirring, Naugatuck River Review, and Persimmon Tree. Her second poetry collection, The Way a Woman Knows, was released in February 2015 by The Poetry Box, Portland, Oregon.  Martin was the winner of the 2015 Songs of Eretz Poetry Award.

Poet's Notes ("Second Sight"):  One street south of my own lies a tract of land developed in the 1970s. Large houses sit on half-acres and are embraced by stands of old growth Douglas firs. I love strolling in the shade of these trees, often writing lines of poetry in my head or practicing a speech for some public event.

One night I finally saw “the holly berried/in the trees” and realized that I had missed it during years of walking by. This moment of sight led to the insight that there is so much around me – like the squirrels antagonizing a neighbor’s dog or the cyclone of gnats invading a summer evening – I miss because I live in my head more than I live in the world. Now I challenge myself to be attentive to first glances. They usually provide powerful images for poems.

Editor's Note ("Second Sight"):  The poet's use of rhyme both at the end of and within the lines is nicely done, as is her impeccable use of iambic pentameter. The poem reads to me like the best of Wordsworth.  There is an interesting paradox in that the poem is about a missed observation of beauty but at the same time so beautifully describes the missed observation.  "Second Sight" was first published in Finding Compass, 2011.

Poet's Notes ("Written in … "):  Billy Collins: I love his poetry and way he performs it. Spring boarding from “Fishing on the Susquehanna in July,” my poem plays off his directions, mis-directions, simple language, and delightful surprises as well as the way he commands an audience. Most of the images and physical gestures are his. I had fun improvising, and came away with the realization that I couldn’t get near imitating the art of this unique poet.

Editor's Note ("Written in …"):  This is a fine tribute to Collins in words as well as form, while still retaining something essentially Martin.  The poem was first published in Finding Compass, 2011.
Posted by Steven Wittenberg Gordon, MD at 3:25 PM