Editor's Note:  For well over a year, it has been the custom of the Songs of Eretz Poetry Review to review one poem a day.  The first year of the Review provided an analysis of the offerings from Poets.org's Poem-A-Day; for the past several months, the poems analyzed were chosen more or less at random by the editor.  This practice has resulted in reviews of a broad range of poems and poets.

While breadth is certainly of value in a poetry reviewing enterprise, just as valuable, perhaps more so, is depth.  Accordingly, beginning today, the Poetry Review will dedicate an extended period of time--up to a month, perhaps--to the work of a single poet.  The month of June 2014 will be dedicated to the vast body of work of William Wordsworth.

I am fortunate enough to have in my possession a copy of The Essential Wordsworth selected and introduced by Seamus Heaney (Galahad Books, New York, 1993).  Unless otherwise indicated, all biographical and other background information about Wordsworth will be taken either from this source, which I shall cite as "SH," or from the Poetry Foundation article found here:  http://www.poetryfoundation.org/bio/william-wordsworth, which I shall cite as "PF."  All of Wordworth's works are in the public domain, and, therefore reprinting of his poems in the Review will be perfectly legal. 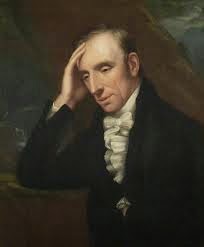 William Wordsworth (1770 - 1850) (pictured) enjoyed an idyllic early childhood in rural Cumberland until he was orphaned at the age of thirteen.  It was during this time that Wordsworth developed his reverence for and appreciation of the natural world which would profoundly influence his poetry.  In 1787, at the age of seventeen, having distinguished himself in grammar school, he was accepted to Cambridge as a "sizar," the euphemism for a student receiving school-sponsored "financial aid." [PF]

In 1790, Wordsworth left Cambridge in favor of taking a four-month tour of the Alps with a college friend.  This time in France and Switzerland firmly cemented his love of nature and triggered a hatred for tyranny and love of democracy.  He would return to France in 1791 where he was further radicalized in favor of democracy--a philosophy that would be reflected in his poetry. [PF]

Upon returning to England in 1792, he was befriended by another adept of democracy, Samuel Taylor Coleridge.  Wordsworth settled in Dorset with his sister, Dorothy, but later moved to Nether Stowey in order to be closer to Coleridge. [PF]  It was during this time that he would compose the first of his important poetic works, poems that would later be seen in his master collection, Lyrical Ballads (1798):   "The Ruined Cottage," "Goody Blake and Harry Gill," and "Michael."  Here, Wordsworth confronted poverty, regarding it sympathetically, and encouraged adults to look back to and trust the magical memories of childhood.  His poetry of this period also encouraged remaining resolute and positive in the face of tyranny, and to acknowledge the pervasiveness of pain while still enjoying moments of pleasure.  These sentiments, coupled with his love of nature, became the backbone of Wordsworth's mature poetic message. [SH]

In 1802, Wordsworth unexpectedly came into some money that had been owed to his father.  This allowed him to feel financially stable enough to marry Mary Hutchinson.  In 1805, he began The Prelude, or "poem to Coleridge," a major poem of thirteen books considered by many critics to be Wordsworth's greatest poetic achievement. [PF]

From 1813 until his death in 1850, the Wordsworth family--which included Dorothy--would live in Rydal Mount--a large, well-appointed house located near Grasmere.  Wordsworth fame would spread, eventually leading to his being granted the title of Poet Laureate.  However, his poetry during this period, while voluminous and popular, lacked the fire and unique introspective qualities of his youthful work. [SH]
Posted by Steven Wittenberg Gordon, MD at 8:13 PM