Poem of the Day: "A narrow girdle of rough stones and crags" by William Wordsworth, Poet of the Month


A narrow girdle of rough stones and crags 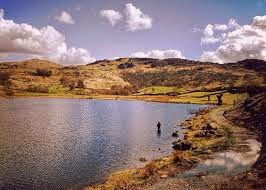 A narrow girdle of rough stones and crags,
A rude and natural causeway, interposed
Between the water and a winding slope
Of copse and thicket, leaves the eastern shore
Of Grasmere safe in its own privacy:
And there myself and two beloved Friends,
One calm September morning, ere the mist
Had altogether yielded to the sun,
Sauntered on this retired and difficult way.
——Ill suits the road with one in haste; but we
Played with our time; and, as we strolled along,
It was our occupation to observe
Such objects as the waves had tossed ashore—
Feather, or leaf, or weed, or withered bough,
Each on the other heaped, along the line
Of the dry wreck. And, in our vacant mood,
Not seldom did we stop to watch some tuft
Of dandelion seed or thistle's beard,
That skimmed the surface of the dead calm lake,
Suddenly halting now—a lifeless stand!
And starting off again with freak as sudden;
In all its sportive wanderings, all the while,
Making report of an invisible breeze
That was its wings, its chariot, and its horse,
Its playmate, rather say, its moving soul.
—And often, trifling with a privilege
Alike indulged to all, we paused, one now,
And now the other, to point out, perchance
To pluck, some flower or water-weed, too fair
Either to be divided from the place
On which it grew, or to be left alone
To its own beauty. Many such there are,
Fair ferns and flowers, and chiefly that tall fern,
So stately, of the queen Osmunda named;
Plant lovelier, in its own retired abode
On Grasmere's beach, than Naiad by the side
Of Grecian brook, or Lady of the Mere,
Sole-sitting by the shores of old romance.
—So fared we that bright morning: from the fields
Meanwhile, a noise was heard, the busy mirth
Of reapers, men and women, boys and girls.
Delighted much to listen to those sounds,
And feeding thus our fancies, we advanced
Along the indented shore; when suddenly,
Through a thin veil of glittering haze was seen
Before us, on a point of jutting land,
The tall and upright figure of a Man
Attired in peasant's garb, who stood alone,
Angling beside the margin of the lake.
"Improvident and reckless," we exclaimed,
"The Man must be, who thus can lose a day
Of the mid harvest, when the labourer's hire
Is ample, and some little might be stored
Wherewith to cheer him in the winter time."
Thus talking of that Peasant, we approached
Close to the spot where with his rod and line
He stood alone; whereat he turned his head
To greet us—and we saw a Mam worn down
By sickness, gaunt and lean, with sunken cheeks
And wasted limbs, his legs so long and lean
That for my single self I looked at them,
Forgetful of the body they sustained.—
Too weak to labour in the harvest field,
The Man was using his best skill to gain
A pittance from the dead unfeeling lake
That knew not of his wants. I will not say
What thoughts immediately were ours, nor how
The happy idleness of that sweet morn,
With all its lovely images, was changed
To serious musing and to self-reproach.
Nor did we fail to see within ourselves
What need there is to be reserved in speech,
And temper all our thoughts with charity.
—Therefore, unwilling to forget that day,
My Friend, Myself, and She who then received
The same admonishment, have called the place
By a memorial name, uncouth indeed
As e'er by mariner was given to bay
Or foreland, on a new-discovered coast;
And POINT RASH-JUDGMENT is the name it bears.

"A narrow girdle of rough stones and crags" is a blank verse, narrative poem of eighty lines with no stanza breaks.  Here we see, as Seamus Heaney points out in his introduction to The Essential Wordsworth, that Wordsworth was concerned with the condition of his fellow man.  His poetry and other writings often laud the quiet dignity that may be found in poverty and urge those who are better off to treat their impoverished brethren with respect.