Poem of the Day: "Ode on Intimations of Immortality, Part III" by William Wordsworth, Poet of the Month

For the Songs of Eretz Poem of the Day for June 22, 2014, we continue with Part III of our examination of "Ode on Intimations of Immortality" by William Wordsworth, Poet of the Month. 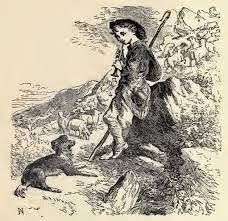 Now, while the birds thus sing a joyous song,
And while the young lambs bound
As to the tabor’s sound,
To me alone there came a thought of grief:
A timely utterance gave that thought relief,
And I again am strong.
The cataracts blow their trumpets from the steep,--
No more shall grief of mine the season wrong:
I hear the echoes through the mountains throng.
The winds come to me from the fields of sleep,
And all the earth is gay;
Land and sea
Give themselves up to jollity,
And with the heart of May
Doth every beast keep holiday;--
Thou child of joy,
Shout round me, let me hear thy shouts, thou happy
Shepherd-boy!

Part III of Wordsworth's "Ode" has the most intricate and unusual rhyme scheme that we have seen in the poems we have studied this month:  abbccadaadeffeeghg.  Although the poem is presented as a single stanza of eighteen lines, it naturally breaks itself up into two pseudo stanzas comprised of the first six lines and the last twelve.  The penultimate line stands alone--it rhymes with no other.  Wordsworth probably enjambed the last line for emphasis rather than making it the end of the seventeenth line.

So, who is the "happy Shepherd boy?"  Did the speaker, presumably Wordsworth, get shaken from his melancholia by literally hearing a "timely utterance" from an actual shepherd boy?  Or does Wordsworth perhaps refer to his own inner child coming to his rescue by dispelling the intrusive negative thoughts of adulthood?  The poem could work either way, but I lean toward the latter interpretation.
Posted by Steven Wittenberg Gordon, MD at 7:51 PM