Poem of the Day: "She dwelt among the untrodden ways" by William Wordsworth, Poet of the Month

The Songs of Eretz Poem of the Day for June 11, 2014 is "She dwelt among the untrodden ways" by William Wordsworth, Poet of the Month.  Information about the Songs of Eretz Poet of the Month feature as well as a biographical essay about William Wordsworth may be found here:  http://www.eretzsongs.blogspot.com/2014/06/songs-of-eretz-poetry-review-poet-of.html. 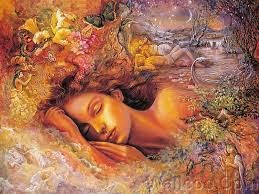 She dwelt among the untrodden ways
William Wordsworth

She dwelt among the untrodden ways
Beside the springs of Dove,
A Maid whom there were none to praise
And very few to love:

A violet by a mossy stone
Half hidden from the eye!
----Fair as a star, when only one
Is shining in the sky.

She lived unknown, and few could know
When Lucy ceased to be;
But she is in her grave, and, oh,
The difference to me!

Here we have yet another of Wordsworth's melancholy rhyming ballads in iambic tetrameter with a foot omitted every even line for emphasis, similar to "A slumber did my spirit seal" (featured in Songs of Eretz June 10, 2014 http://www.eretzsongs.blogspot.com/2014/06/poem-of-day-slumber-did-my-spirit-seal.html), and one of several "Lucy" poems composed by the poet.  It is unclear who this Lucy was, or if she even did exist. [SH]  Lucy apparently did indeed "live unknown."