Poem of the Day: "Goody Blake and Harry Gill" by William Wordsworth, Poet of the Month

The Songs of Eretz Poem of the Day for June 5, 2014 is "Goody Blake and Harry Gill" by William Wordsworth, Poet of the Month, with apologies for the tardy posting.  Information about the Songs of Eretz Poet of the Month feature as well as a biographical essay about William Wordsworth may be found here:  http://www.eretzsongs.blogspot.com/2014/06/songs-of-eretz-poetry-review-poet-of.html. 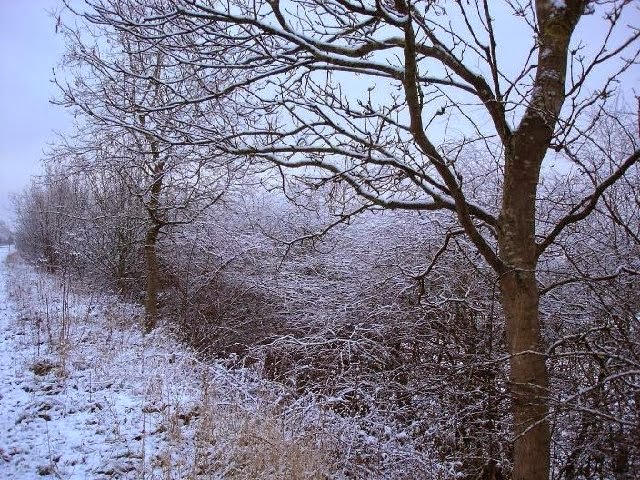 Good duffle grey, and flannel fine;
He has a blanket on his back,
And coats enough to smother nine.

Young Harry was a lusty drover,
And who so stout of limb as he?
His cheeks were red as ruddy clover;
His voice was like the voice of three.
Old Goody Blake was old and poor;
Ill fed she was, and thinly clad;
And any man who passed her door
Might see how poor a hut she had.

All day she spun in her poor dwelling:
And then her three hours' work at night,
Alas! 'twas hardly worth the telling,
It would not pay for candle-light.
Remote from sheltered village-green,
On a hill's northern side she dwelt,
Where from sea-blasts the hawthorns lean,
And hoary dews are slow to melt.

By the same fire to boil their pottage,
Two poor old Dames, as I have known,
Will often live in one small cottage;
But she, poor Woman! housed alone.
'Twas well enough when summer came,
The long, warm, lightsome summer-day,
Then at her door the 'canty' Dame
Would sit, as any linnet, gay.

But when the ice our streams did fetter,
Oh then how her old bones would shake!
You would have said, if you had met her,
'Twas a hard time for Goody Blake.
Her evenings then were dull and dead:
Sad case it was, as you may think,
For very cold to go to bed;
And then for cold not sleep a wink.

O joy for her! whene'er in winter
The winds at night had made a rout;
And scattered many a lusty splinter
And many a rotten bough about.
Yet never had she, well or sick,
As every man who knew her says,
A pile beforehand, turf or stick,
Enough to warm her for three days.

Now, when the frost was past enduring,
And made her poor old bones to ache,
Could any thing be more alluring
Than an old hedge to Goody Blake?
And, now and then, it must be said,
When her old bones were cold and chill,
She left her fire, or left her bed,
To seek the hedge of Harry Gill.

Now Harry he had long suspected
This trespass of old Goody Blake;
And vowed that she should be detected--
That he on her would vengeance take.
And oft from his warm fire he'd go,
And to the fields his road would take;
And there, at night, in frost and snow,
He watched to seize old Goody Blake.

And once, behind a rick of barley,
Thus looking out did Harry stand:
The moon was full and shining clearly,
And crisp with frost the stubble land.
--He hears a noise--he's all awake--
Again?--on tip-toe down the hill
He softly creeps--'tis Goody Blake;
She's at the hedge of Harry Gill!

Right glad was he when he beheld her:
Stick after stick did Goody pull:
He stood behind a bush of elder,
Till she had filled her apron full.
When with her load she turned about,
The by-way back again to take;
He started forward, with a shout,
And sprang upon poor Goody Blake. 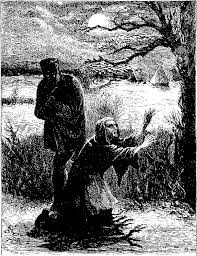 She prayed, her withered hand uprearing,
While Harry held her by the arm--
"God! who art never out of hearing,
O may he never more be warm!"
The cold, cold moon above her head,
Thus on her knees did Goody pray;
Young Harry heard what she had said:
And icy cold he turned away.

He went complaining all the morrow
That he was cold and very chill:
His face was gloom, his heart was sorrow,
Alas! that day for Harry Gill!
That day he wore a riding-coat,
But not a whit the warmer he:
Another was on Thursday brought,
And ere the Sabbath he had three.

'Twas all in vain, a useless matter,
And blankets were about him pinned;
Yet still his jaws and teeth they clatter;
Like a loose casement in the wind.
And Harry's flesh it fell away;
And all who see him say, 'tis plain,
That, live as long as live he may,
He never will be warm again.

No word to any man he utters,
A-bed or up, to young or old;
But ever to himself he mutters,
"Poor Harry Gill is very cold."
A-bed or up, by night or day;
His teeth they chatter, chatter still.
Now think, ye farmers all, I pray,
Of Goody Blake and Harry Gill!

The poem is presented as a narrative ballad in several rhyming octets of iambic tetrameter.  Here we see the poet's sense of, ahem, poetic justice and respect and sympathy for the destitute and downtrodden.  While at first glance a fable for children, here we also see Wordsworth harnessing the child within the adult in order to convey his message. [SH]
Posted by Steven Wittenberg Gordon, MD at 7:19 PM