Poem of the Day: "Ode on Intimations of Immortality, Part X" by William Wordsworth, Poet of the Month

For the Songs of Eretz Poem of the Day for June 29, 2014, we continue with our study of "Ode on Intimations of Immortality" by William Wordsworth, Poet of the Month.  Today we will examine Part X. 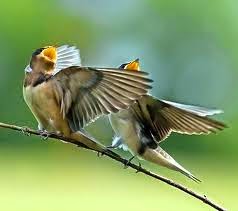 Then, sing, ye birds, sing, sing a joyous song!
And let the young lambs bound
As to the tabor’s sound!
We, in thought, will join your throng,
Ye that pipe and ye that play,
Ye that through your hearts to-day
Feel the gladness of the May!
What though the radiance which was once so bright
Be now for ever taken from my sight,
Though nothing can bring back the hour
Of splendour in the grass, of glory in the flower;
We will grieve not, rather find
Strength in what remains behind;
In the primal sympathy
Which having been must ever be;
In the soothing thoughts that spring
Out of human suffering;
In the faith that looks through death,
In years that bring the philosophic mind.

Part X contains nineteen lines, an unusual number of lines for a rhyming form poem.  The rhyme scheme is a complex abbacccddeeffgghhif with the penultimate line having no other that rhymes with it, and the final line rhyming with one six lines back.  The rhythm is irregular, staccato at times--the eleventh line even has six feet!  One imagines that Wordsworth did not choose this structure, but that it flowed from his pen rapidly and exuberantly and perhaps without thought as his Ode was coming to an end.

The message is still one of hope and optimism--that it is possible to capture the naive wonder that children find in nature, and that it is possible, with perseverance, to harness this ability to limit the anxiety and care that comes with the responsibilities of adulthood.  The poem reads as a hymn to this concept--the opening line particularly evokes Psalm 96.
Posted by Steven Wittenberg Gordon, MD at 9:55 PM