Poem of the Day: "Lucy Gray; or, Solitude" by William Wordsworth, Poet of the Month

The Songs of Eretz Poem of the Day for June 14, 2014 is "Lucy Gray; or, Solitude" by William Wordsworth, Poet of the Month.  Information about the Songs of Eretz Poet of the Month feature as well as a biographical essay about William Wordsworth may be found here:  http://www.eretzsongs.blogspot.com/2014/06/songs-of-eretz-poetry-review-poet-of.html. 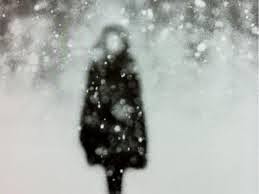 Oft I had heard of Lucy Gray,
And when I cross'd the Wild,
I chanc'd to see at break of day
The solitary Child.

No Mate, no comrade Lucy knew;
She dwelt on a wild Moor,
The sweetest Thing that ever grew
Beside a human door!

You yet may spy the Fawn at play,
The Hare upon the Green;
But the sweet face of Lucy Gray
Will never more be seen.

"To-night will be a stormy night,
You to the Town must go,
And take a lantern, Child, to light
Your Mother thro' the snow."

"That, Father! will I gladly do;
'Tis scarcely afternoon—
The Minster-clock has just struck two,
And yonder is the Moon."

At this the Father rais'd his hook
And snapp'd a faggot-band;
He plied his work, and Lucy took
The lantern in her hand.

Not blither is the mountain roe,
With many a wanton stroke
Her feet disperse, the powd'ry snow
That rises up like smoke.

The storm came on before its time,
She wander'd up and down,
And many a hill did Lucy climb
But never reach'd the Town.

The wretched Parents all that night
Went shouting far and wide;
But there was neither sound nor sight
To serve them for a guide. 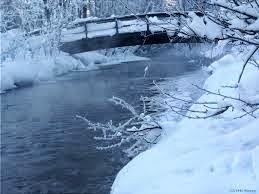 At day-break on a hill they stood
That overlook'd the Moor;
And thence they saw the Bridge of Wood
A furlong from their door.

And now they homeward turn'd, and cry'd
"In Heaven we all shall meet!"
When in the snow the Mother spied
The print of Lucy's feet.

Then downward from the steep hill's edge
They track'd the footmarks small;
And through the broken hawthorn-hedge,
And by the long stone-wall;

And then an open field they cross'd,
The marks were still the same;
They track'd them on, nor ever lost,
And to the Bridge they came.

They follow'd from the snowy bank
The footmarks, one by one,
Into the middle of the plank,
And further there were none.

Yet some maintain that to this day
She is a living Child,
That you may see sweet Lucy Gray
Upon the lonesome Wild.

O'er rough and smooth she trips along,
And never looks behind;
And sings a solitary song
That whistles in the wind.

Editor's note:  In the online version of this poem that I used for ease of cutting and pasting, the word "faggot" had been replaced with "****."  This editor thinks that editors who do such things are themselves no smarter than faggots (bundles of sticks).
Posted by Steven Wittenberg Gordon, MD at 3:59 PM