Poem of the Day: "The World Is Too Much With Us" by William Wordsworth

"The World Is Too Much With Us" by William Wordsworth is the Songs of Eretz Poem of the Day and the offering from Poet.org's Poem-A-Day for April 27, 2014.  The poem is in the public domain and reprinted here.


The World Is Too Much With Us 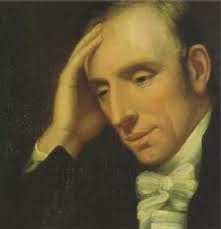 The world is too much with us; late and soon,
Getting and spending, we lay waste our powers;
Little we see in Nature that is ours;
We have given our hearts away, a sordid boon!
This Sea that bares her bosom to the moon;
The winds that will be howling at all hours,
And are up-gathered now like sleeping flowers,
For this, for everything, we are out of tune;
It moves us not.--Great God!  I'd rather be
A pagan suckled in a creed outworn;
So might I, standing on this pleasant lea,
Have glimpses that would make me less forlorn;
Have sight of Proteus rising from the sea;
Or hear old Triton blow his wreathèd horn.

William Wordsworth (1770 - 1850) (pictured) was a major poet in the English Romantic movement.  He traveled throughout Europe for almost his entire life, and his observations in his travels profoundly influenced him.  He was one of the first English poets to favor lyrical over epic poetry and the speech of the "common man" over the highly formal speech that was favored by the poets before his time.  Reference to this and additional biographical information may be found here:  http://www.poets.org/poet.php/prmPID/296.

Well, for a poet who favored the speech of the "common man," we have here a traditional, old-fashioned, Italian sonnet (8 line set-up and 6 line punchline in good old iambic pentameter), complete with references to antiquity.  However, it is certainly lyrical, and its message--that the beauty of Nature (with a capital N) is something worthy of the gods of old--is certainly a romantic one.
Posted by Steven Wittenberg Gordon, MD at 9:08 PM