Poem of the Day: "I'm Nobody! Who are you?" by Emily Dickinson

"I'm Nobody!  Who are you?" by Emily Dickinson is the Songs of Eretz Poem of the Day for April 30, 2014.  This poem is in the public domain and therefore legally reprinted here.  Miss Dickinson's poetry has been reviewed several times in Songs of Eretz.  A review that includes biographical information may be found here:  http://eretzsongs.blogspot.com/2013/12/review-of-its-all-i-have-to-bring-today.html. 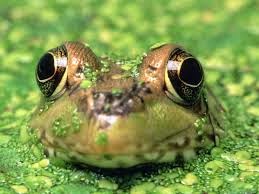 I’m Nobody! Who are you?
by Emily Dickinson

How dreary – to be – Somebody!
How public – like a Frog –
To tell one’s name – the livelong June –
To an admiring Bog!

Emily Dickinson certainly practiced what she preached in "I'm Nobody."  She never married, hardly ever left her home, and composed hundreds of poems but did not allow a single one to be published during her lifetime.  Ironically, there is no doubt that Miss Dickinson was "somebody."  She did not proclaim her name "like a Frog," but achieved fame and even a measure of immortality nevertheless.  She certainly had disdain not only for the vociferously well-known, but for their admirers, whom she compared to a "bog."
Posted by Steven Wittenberg Gordon, MD at 10:07 AM