Poem of the Day: "A Nation's Strength" by Ralph Waldo Emerson

"A Nation's Strength" by Ralph Waldo Emerson is the Songs of Eretz Poem of the Day for April 28, 2014.  It is in the public domain and reprinted here. 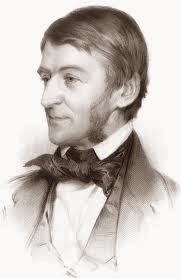 What makes a nation's pillars high
And its foundations strong?
What makes it mighty to defy
The foes that round it throng?

It is not gold. Its kingdoms grand
Go down in battle shock;
Its shafts are laid on sinking sand,
Not on abiding rock.

Is it the sword? Ask the red dust
Of empires passed away;
The blood has turned their stones to rust,
Their glory to decay.

And is it pride? Ah, that bright crown
Has seemed to nations sweet;
But God has struck its luster down
In ashes at his feet.

Not gold but only men can make
A people great and strong;
Men who for truth and honor's sake
Stand fast and suffer long.

Brave men who work while others sleep,
Who dare while others fly...
They build a nation's pillars deep
And lift them to the sky.

Ralph Waldo Emerson (1803 - 1882) (pictured) was the chief spokesman for the Transcendental Movement, a reaction against scientific rationalism.  The Transcendentalists believed that intuition, rather than observation, was the best way to understand the universe, and that the entire universe could be understood and appreciated by contemplating the smallest part of it.  Emerson is perhaps more famous for his essays than his poems.  Reference to this and additional biographical information may be found here:  http://www.poets.org/poet.php/prmPID/201.

"A Nation's Strength" is a ballad that I wish all of our elected representatives would be required to read.  Far too many of them believe that thoughtless expenditure of treasure, mindless military might, and false pride or nationalism for nationalism's sake are what make our nation strong.  And, sadly, far too many individual voters allow them free reign to indulge in their fallacious philosophy.
Posted by Steven Wittenberg Gordon, MD at 10:31 AM