Poem of the Day: "To Amy Lowell" by Eunice Tietjens

"To Amy Lowell" by Eunice Tietjens is the Songs of Eretz Poem of the Day and the offering from Poets.org's Poem-A-Day for April 12, 2014.  The poem was published in 1919 in Tietjens' collection, Body and Raiment, and is, therefore, in the public domain and legally and conveniently reprinted here. 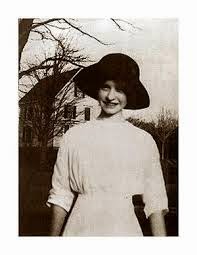 To Amy Lowell
who visits me in a hospital

Like a fleet with bellying sails,
Like the great bulk of a sea-cliff with the staccato bark
of waves about it,
Like the tart tang of the sea breeze
Are you;
Filling the little room where I lie straitly on a white
island between pain and pain.

Eunice Tietjens (1884 - 1944) (pictured right) was a poet, novelist, editor, and wartime newspaper correspondent.  A major figure of the Chicago Renaissance, she published four collections of poetry.  Reference to this and additional biographical information may be found here:  http://www.poetryfoundation.org/bio/eunice-tietjens. 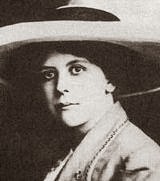 As a major proponent of the Imagist Movement, Amy Lowell no doubt would have been pleased by this poem.  It contains a simple conceit, and creates hard, crisp, clear images.  In addition to the obvious nautical images, the image of sails in the first line evokes the image of hospital sheets later in the poem.

The poetic license Tietjens used by coining the word "straitly" is brilliant.  As an invalid in a hospital, Tietjen was certainly in dire "straits."  She perhaps lay rigidly "straight" in her bed, racked with pain.  And of course, there is the obvious "strait," as in a narrow passage of water, that flows around the hospital-white island of her pain.
Posted by Steven Wittenberg Gordon, MD at 3:02 PM